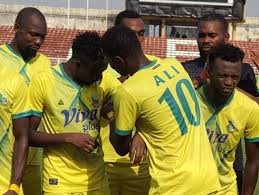 Kano Pillars goalkeeper, Suraj Ayeleso has described their Aiteo Cup Round of 16 foes, Kebbi United as tough and should be approached the same way they did to Smart City in the last round.

Sai Masu Gida defeated Smart City of Lagos 4-2 in the Round of 32 and after considering what the non-league side did before they were beaten, Ayeleso told SportingLife that they are aware they cannot joke with Kebbi United In today’s game.

“We cannot afford to joke with Kebbi United after looking at what they did in the last round to Kwara United. We must go for the win under the 90 minutes regulation time because penalties are nobody’s game,” Ayeleso told www.dasportstainment247.com.

“The technical crew may have to make changes because we didn’t do well in Akure against Sunshine Stars. They may have to rest some of the players that faced Sunshine to ensure we have players who are fresh and ready for the task ahead against Kebbi United.”