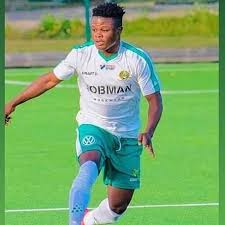 Former Golden Eaglets hitman, Akinkunmi Amoo failed to increase his three goals tally for the season in his eighth game of the campaign as his Swedish club, Hammarby fell 2-1 to Kalmar FF in a Week 8 tie played yesterday.

Hammarby scored first through Gustav Ludwigson in the seventh minute but Pereira Siplao equalised for the home team in the 39th minute and Rasmus Sjoestedt completed the comeback with the second goal for the host in the 68th minute.

Amoo started his seventh game of the season in eight appearances and he has scored three goals and made an assist for Hammarby thus far. He was substituted by David Accam in the 72nd minute. His Swedish side are seventh on the log with 11 points from eight games.

The Swedish Allsvenskan will proceed on break to converge on July 4 with Hammarby playing at home to Halmstads BK.