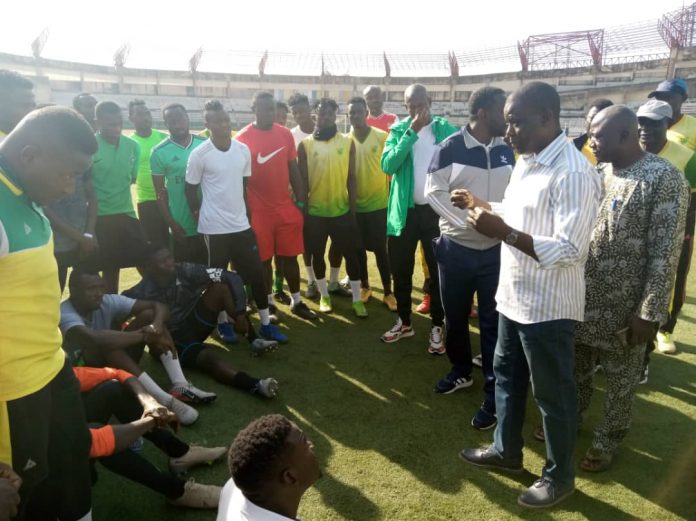 The management of Plateau United Football Club of Jos has placed the entire team on half salary following their poor start to the Nigeria Professional Football League after losing 2-0 to Kwara United of Ilorin at the new Jos Stadium in the opening game of the season.

General Manager of the Club, Pius Henwan gave the directive while addressing players and coaches of the team.

He explained that the team has no excuse whatsoever not to beat Kwara United stressing that their performance during the match was not acceptable.

Henwan lamented that despite the state government’s huge investment on the team, the players are not reciprocating the gesture.

He warned that anybody who is not ready to work for the collective aspirations of the team, will be shown the way out.

“Plateau United is a big brand in Nigerian football and any of you who is not ready to defend the colours of the club, should just bore out,” Henwan was quoted in a press statement from the club media.

“Some of you are injured or sick since we returned from Tanzania but it seems others decided to exclude themselves from training under the guise of been injured. Such indiscipline will not be condoned here and anyone found wanting will be decisively dealt with.”

He disclosed that the team must recoup the three points in their next away match and until that is achieved, the players will remain on half salary.

While meeting separately with the technical crew and other backroom staff of the team at the club house, the General Manager urged them to close ranks and work as a team to change the fortunes of the team.

Henwan who expressed confidence in the ability of the head coach Abdu Maikaba to deliver, encouraged him to take all necessary measures to return the team to winning ways as quickly as possible.

He assured the head coach that management will continue to give him the maximum support to enable him to succeed and encouraged him not to be deterred by the negative criticisms from detractors, but rather see it as a challenge that is surmountable.

Head coach of the team, Abdu Maikaba said he is ready to step aside if he is found to be the problem of the team saying that all the criticisms directed at him are unfair and baseless.

“I have been working hard to give all the players the chance to compete for places in the team and if some players will accuse me of been biased, then the identity of such players be revealed because they are the ones thwarting my efforts to change the fortunes of the team,” Maikaba hinted.

Plateau United travel to next door neighbours, Wikki Tourists this weekend in one of the Matchday Two games billed for this weekend.