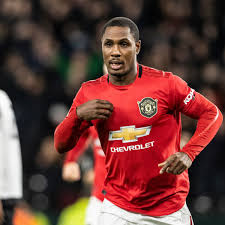 Manchester United forward, Odion Jude Ighalo has penned an emotional goodbye message to the Red Devils’ fans, management and ex-teammates as he announced his departure from the 20 times EPL champions exactly a year after joining the team.

Ighalo in the message posted on his official twitter handle on Tuesday said although it was hard to see his dream to play for the Red Devils come to an end, but that it was an honour for him to put on the club’s jersey stressing that he would relish the opportunity as long as he is alive.

“It’s so hard to see this dream come to an end. But | give God the glory for helping me fulfill this life long dream of putting on a Manchester United shirt as a player and represent this great club, it was indeed an honor | will forever cherish and be grateful for,” he explained in one of his tweets as captured by www.dasportstainment247.com.

He expressed his gratitude to Man.U Manager, Ole Gunnar Solksjaer for the confidence reposed in him and stated his optimism that the club would emerge as the EPL champions at the end of the season.

Ughalo wrote: “To the Manager, I say thank you for trusting and believing in me when many did not, to my amazing teammates | will miss you guys, it was always fun and a time I look forward to training and spending time with all of you. And | pray we win the LEAGUE and FA cup this year

“To the best fans in the world ( the Manchester United fans ) we have missed you, but we hear your voices cheering us on from afar, we can’t wait to have you all back on the stands.

“I’m still and would remain a MANCHESTER UNITED FAN forever. Once a Red, always a
Red

“Thank you @manchesterunited and God bless,” he said.

Ighalo joined Manchester United from the Chinese side, Shanghai Shenhua on an initial six months loan in January last year. However, upon expiration in May, the Red Devils extended the deal for another six months.

The former Super Eagles striker however is not without suitors as he has expressed his desire to play in MLS with several unnamed EPL clubs reportedly seeking his signature.

The Spanish side, Real Betis is reported to have offered a loan deal for the former Watford hitman.