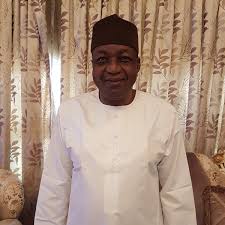 Nigeria’s sporting fraternity was thrown into grief once again as the death was announced on Tuesday morning of the former Minister/Chairman, National Sports Commission, Hon. Bala Bawa Ka’oje. He was 60 years of age.

The Nigeria Football Federation expressed its shock and sadness at the passing of the former Minister, with the NFF General Secretary, Dr Mohammed Sanusi describing the deceased as “a dignified and unassuming public servant who showed great passion and interest in the development and improvement of Nigeria sports.”

Quietly intelligent, diligent and a man of high integrity, Ka’oje is on record to have conveyed to then NFA (for onward conveyance to world football –governing body, FIFA) in February 2007, the abrogation of Decree 101 hitherto governing the administration of football in Nigeria, and government’s recognition of the approval by then NFA’s Annual General Meeting of the Statutes and its standing orders as the sole regulatory instrument for football administration in Nigeria.

In the letter dated 23rd February 2007, Ka’oje unambiguously stated that “the current board was elected under the current NFA Statutes and not under Decreee 101. This has shown complete democratization of the Association as specified by its Statutes. With this development, it means the Statutes of the Association has taken effect in line with FIFA directive and has assumed a level of supreme document and operational guideline regulating the operations of the Association.”

Born in Kebbi State on 20th September 1960, Bala Bawa Ka’oje earned a master’s degree in structural engineering from the Ahmadu Bello University, Zaria. His remains were interred in Abuja on Tuesday afternoon. The NFF was represented by the General Secretary, Dr Mohammed Sanusi and Head of Member Associations, Ali Abubakar Muhammed.