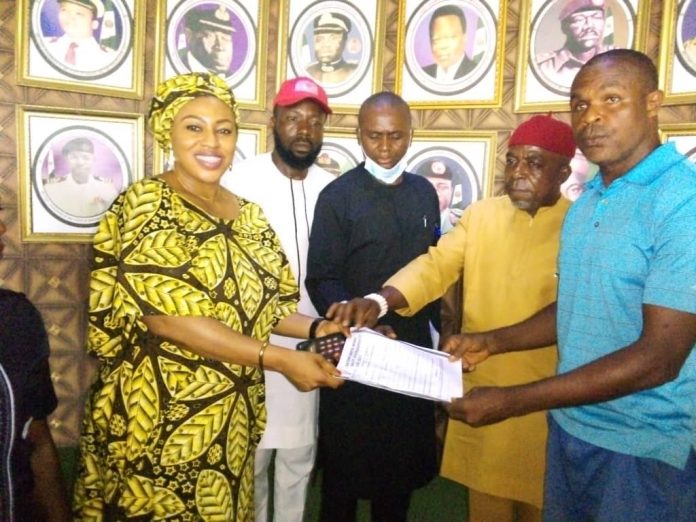 Speaking with journalists in a world press conference organised by the donor, Honourable Princess Miriam Onuoha who represents the good people of Okigwe North Federal Constituency in the House of Representatives, in Owerri, Honourable Onuoha affirmed that discovering of talents that abound in the Okigwe North Federal Constituency was the brain behind the inspiration she got to bankroll the competition and that she will ensure the multimillion naira competition is held annually.

She confirmed that talks are underway to ensure that important personalities from the sport and politics from Imo State and beyond grace the occasion.

“It will be sustained as an annual event which would continue to groom grassroots soccer development,” Honourable Onuoha disclosed.

“I will bring soccer and football enthusiasts like former President of the Nigeria Football Federation, Kojo Williams, Daniel Amokachi, Kanu Nwankwo, and a host of others will grace the occasion when we kick off the main tournament after this registration and screening processes. Towards the end of the year, you can be rest assured that you will come for the grand finale.”

The Isiala Mbano born politician and the first woman to represent the Okigwe North Federal Constituency in the House of Representatives further hinted that the tournament will be in synergy with the Nigeria Drug Law Enforcement Agency (NDLEA) to fish out those with using banned drugs for prosecution.

The legislator noted that sales of forms and other activities that will herald the start of the tournament have begun and she affirmed that mouthwatering prizes and financial gifts are to be scooped by the top three teams while all participating teams are entitled to consolation prizes.

“We are still looking at the overall enrolment from the three local government areas and ward levels. The winner won’t get anything less than One million naira while the second position gets N750,000 and the third position will cart home N500,000.

“The most interesting thing in this tournament is that every team is a winner because there will be consolation prizes for each of the teams that register. There will be my signature football and prize money that will be given.

“We shall have 12 teams that will take part in the tournament proper and they are made of four teams each from the three local government areas.

“In a fortnight we will be launching our Okigwe North Development Initiative Website where you can also download the form there and fill it out.

“I rely on God that makes it possible for me to here today and I also want to appreciate His Excellency the Governor of Imo state, Distinguish Senator Hope Uzodinma for the support that I have got.”

The astute politician also explained the reason she has committed her resources towards the success of the tournament which will see four teams emerge from each of the three Local Government Areas for the real tournament that will traverse the entire Okigwe North Federal Constituency.

“I believe that this is the best time to launch our Okigwe North Honourable Princess Miriam Onuoha Unity and Prosperity Cup 2021 because this is a time when the Nigerian youths are yearning for attention and looking for direction. This tournament provides a platform where our teeming youths will unleash their talents. We will be bringing soccer stars, football entrepreneurs, football academy management, investors, and other stakeholders who would grace the tournament and identify and select raw talents from Okigwe North.

“We have produced foremost footballers and we have the necessary facilities and infrastructures at the Okigwe Township Stadium to host our grand finale. This football tournament is scheduled to run through the three local government areas of Isiala Mbano, Onuimo, and Okigwe and throughout the entire 33 wards of Okigwe North.

“We will run our elimination series at every local government where we will give out our nomination forms to interested teams. There will be equity and fair play and we shall be law-abiding.”