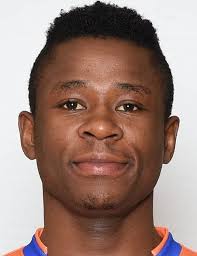 Molde FK Attacker, Leke James has asserted that the Norwegian club will give all it takes to ensure that they qualify to the next round of the Europa League as they face Rapid Vienna in a few hours time at the Allianz Stadion in Vienna.

Molde are second in Group B with nine points from five games ahead of the last group stage tie against third placed Rapid Vienna who will qualify if they managed to win the tie with both teams on minus two goals difference before kick off.

James told www.dasportstainment247.com that they are ready and poised for action. He hinted that they already joggled all the permutations and that they are aware that securing a positive result in Vienna will be crucial to their determination to scale through to the round of 32.

“We know what is at stake and are ready for Rapid Vienna. We have prepared very well for the game and the home win over Aalesund was a pointer that we are psychologically ready for the battle,” James told www.dasportstainment247.com.

“It has been an interesting journey for us from the Champions League to the Europa League and we do not want the a amazing experience to stop like that. We know a little about the way they play and the fact that we beat them in Norway is a big lift ahead of the game.

“It is a game we are ready to put our bodies on the line because of our desire to qualify for the next round.”

James showed the desire that he was ready for the game through his performmance for Molde against Aalesund last weekend. He created assist for Magnus Wolff Eikrem to grab the curtain raiser in the 31st minute beforee scoring his 12th league goal of the season in the 79th minute.

He has played 28 games in all competitions this season and has 14 goals. He is the sixth leading scorer in Norway with his 12 league goals and Molde highest scorer with only three games to the end of the Eliteserien topflight.