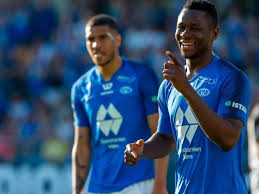 Nigerian players shone like million stars for their respective clubs in the last group games of the Europa League played on Thursday night across Europe.

Victor Osimhen’s SS Napoli, Joe Aribo and Leon Balogun’s Rangers and Leke James’ Molde all progressed to the Round of 32 after they helped their clubs secure important results but Abdullahi Shehu’s Omonia Nicosia and Anderson Esiti of PAOK Thesaloniki crashed out of Europe’s second-tier club competition.

In Group A, AS Roma and Young Boys emerged with 13 and 10 points respectively. Roma were upset 3-1 by PFC CSKA Sofia who won their first game of the group while Young Boys pipped CFR Cluj 2-1 in Switzerland.

In Group B Leke James played a starring role in Molde’s 2-2 draw at Rapid Vienna. James gave the assist for his club’s first goal scored by Magnus Wolff Eikrem in the 12th minute and the same player bagged Molde’s second in the 46th minute but Rapid Vienna fought back through Marcel Ritzmaier and Melih Ibrahimoglu in the 43rd and 90th minute.

Molde finished second with 10 points behind Arsenal who rounded off the group stage with a 4-2 away victory over Dundalk. They are the only team with 100 percent record in the group stage in the competition. A certain Folarin Balogun with Nigeria heritage scored the Gunners fourth goal in the 80th minute.

In Group D, Nigeria duo: Joe Aribo and Leon Balogun played a pivotal role as Rangers finished as group winner ahead of Benfica. Both players started as the Gers secured 2-0 away win at Lech Poznan to end the group stage with 14 points while Benfica 2-2 draw at Standard Liege meant they ended the group stage with 12 points.

In Group E, Anderson Esiti crashed out of the competition with PAOK Thessaloniki after a goalless draw at home to Granada which pays the wages of Ramon Azeez. Azeez is yet to stage a comeback to Granada since he got injured early October but in his absence the club pulled through to the next round as runner up with 11 points. PSV thrashed Omonia Nicosia 4-0 to top the group with 12 points. Abdullahi Shehu plays for Omonia Nicosia.

In Group F, even without yet to be fit Victor Osimhen SS Napoli finished as group winner with 11 points despite being held at home by Real Sociedad.
Piotr Zielinski put the Partenopei ahead in the 35th minute but Willian Jose equalised for the visitors in the 90th minute. In the other group tie, Rijeka beat AZ Aikmaar 2-1.