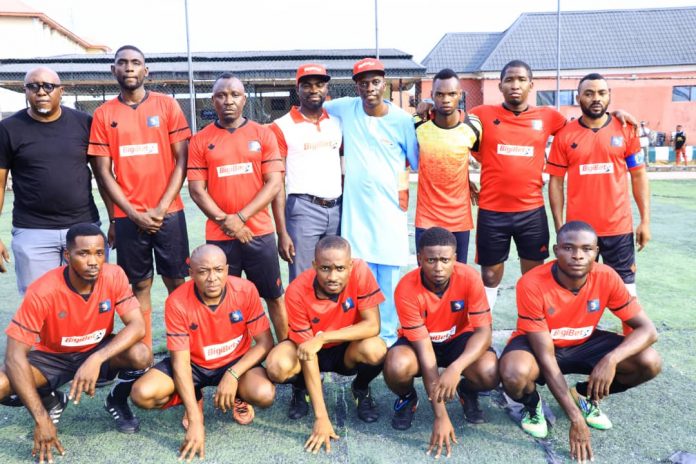 Darling FM Captain Cosmos ChukwuEmeka scored the decisive spot kick to help his team soar past Zanders FM 2-1, in a friendly game powered by BIGIBET on Sunday, at the Kanu Sports Center Owerri.

The contest went into penalty shootout after Zanders FM skipper Dayo Dynamo on the run of play, steered the ball past his opponent goalkeeper Stephen, on the 15th minute. Darling FM’s efforts to restore parity proved abortive with thorns of ‘dili dali’ moves and strikes from, Mc Ogene, Dj Legacy, Evangelist Chinonso Anthony and Chidex Obani respectively, but the latter got his team back in the game with 10 minutes left to play in the second half, the center referee Balogun pointed to the spot for a handball from Zanders Fm defender, who also upended Dj legacy in the process. Chidex stepped up and coolly covert to even the scoreline 1-1 to the delight of the “Peoples Radio” fans.

Meanwhile, Darling FM, Coach Zandas Okeke Otigba introduced fresh legs with Paul Emoghene and Niyi Afolabi taken the place of Bayo Emeka and Joseph, but The game wore down as both teams failed to find the back of the next.

During penalty shoot out, Alariwo of Radio converted one of Zanders FM five kicks, while Darling FM “Rode to Zion” by converting two out of five kicks, which came through Stephen the Goalkeeper and Cosmos the Son of Chukwuemeka (Puyaka), to make it two wins, 1draw, 1 loss, after four meetings with Chai Zanders!