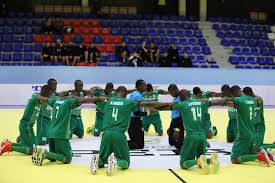 The head coach of the Nigeria Handball team, Emeka Nnamani has stated his displeasure at their opening day loss to Bahrain at the International Handball Federation World Youth Championship in Macedonia.

The Nigerian side who are making their debut at the championship were unable to hold their own against the Asian side and had to be beaten by 36-28 on Tuesday at the IHF Championship.

Coach Nnamani declared his displeasure with the performance of the team but promised that changes will be effected in preparation for the next match against the host, Macedonia on Thursday.

“I am not satisfied with this match,” said Nnanami to
wch2019championship.com.mk. “ We played badly in the attack, plus they are a good team; however, it’s our first match and I am sure that we’ll do better.” Bahrain were never behind in the whole match as Nigeria, making their debut in IHF World youth championship, kept in touch with just a two-goal deficit for nearly 40 minutes, but the fourth-placed African continental youth side could, however, fell apart like badly arranged cards in the last third of the match as Bahrain comfortably took the two points, leading by 10 in the final moments (35:25) before three late Nigerian goals made the scores a little bit more respectable.

The national cadet male team led by diminutive Ibrahim Dikko constantly breathed down the neck of the Bahrainians but consistent goals from Mohamed Mohamed, who ended with 13 in the match, ensured that the Asian side would see out the first half 17-13.

The second half was pretty much same as the Emeka Nnamani tutored side couldn’t outscore Bahrain in the fiercely fought second half of the interesting match played in the Boris Trajkovski Arena, Skopje, Macedonia.

With just seconds remaining, the influential Dikko fell awkwardly on his shoulder and had to be treated well after the final buzzer giving the coaching a big cause for concern.