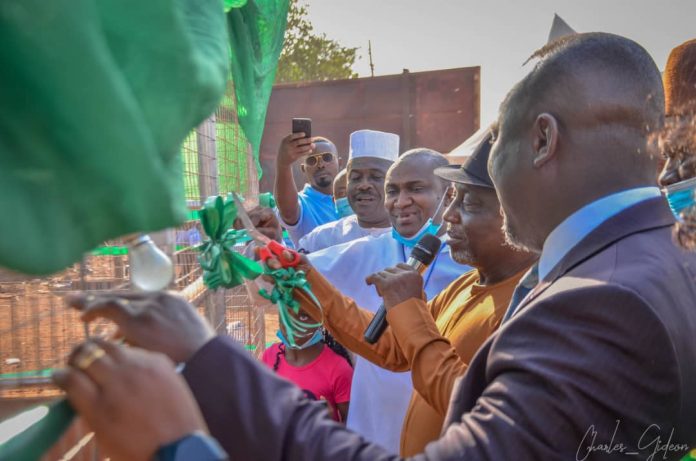 The Hausa Community in Otukpo, Benue State on Christmas day, heaved a sigh of relief as Philanthropist and President of Naija Ratels Football Club, Barrister Paul Edeh donated a 500KVA transformer sub-station worth over N7m to boost electricity supply to the area, which has been without power for more than than 11 months.

The event which was held in Otukpo, had in attendance, the Senator representing Benue South Senatorial district and former Minister of Interior, Senator Abba Moro and some other great son’s and daughters of the Idoma Nation.

Speaking after handing over the transformer sub-station to the Christian and Muslim Community of Otukpo, the Legal luminary noted that it was necessary for him to donate the sub-station after he learnt that the community have been without power for close to a year.
The United Nations Peace Ambassador said the new transformer would boost power supply, address the challenges of electricity supply faced by the people and also promote economic activities in the community which was hitherto before then grounded due to the power outage.

“You will recall that today is exactly 166 days since I donated the first transformer to Zone HB Community and a generator set to the Divisional Police Headquarter in Otukpo , which was of course motivated by the fact that they have not had light for a long time. Sadly, i also understand that this same community I donated transformer to, today have not also had light for close to a year with all economic activities grounded.

“When I got that information, almost three months ago, I was hoping and waiting that the authority concerned (Jos Electricity Distribution Company) will do the needful but they didn’t. So in on of those days in my hotel room in Uyo, I felt the need to reach out to the community and I made that call around 12 midnight and truly realised they have been in darkness for almost a year and hence, I took the onus to assist them by providing a brand new 500kva transformer.
“Indeed what I did was to build a new substation from the scratch to finish which was done within two weeks and today while celebrating Christmas with the same community, we decided to commision it and it was done by no other person, but Senator Abba Moro.

“Truly, the  Muslim community are the biggest beneficiary of this donation and they were very elated and happy about the development. Infact the Transformer is located beside the St Mary Catholic Church which is adjacent the Central mosque. So I am happy that the Muslim and Christian community benefited from this project.

“The truth is that I  have never been a politician and not all of us must get into politics to make impacts in our community. What is important is having the right mindset and heart  to give back to the society, which is what I am doing. Am glad that for the first time in almost a year, these people will enjoy uninterrupted power supply and that is exactly what pleases my heart as a person.” He concluded.

Commissioning the transformer sub-station earlier, the Senator representing Benue South Senatorial District Distinguished Senator Abba Moro commended Barr. Paul Edeh for his efforts at complimenting the efforts of the Government by providing another transformer sub-station within a space or 6 months.
He noted that rather than sit in the comfort of his office like many critics who prefer to criticise government for lack of provision of basic amenities, he rather chose to assist his community.

“For the second time within this year I am coming to commission a transformer provided by a son of Idoma land Barrister Paul. Each time Paul tells me I should commission a project, I have never asked him what is actually your motivation. Because when I begin to listen to the story of Paul, it is a story of somebody who denies himself happiness to make the other person happy.

“He is a person who tirelessly works so hard with a hard face to put a smile on the faces of other people. Paul has been a typical example of what I tell people that you don’t have to be in government to help the other person.” Senator Abba Moro stated.

The Chairman of the Muslim Youth in the community, Alhaji Aliyu Yinusa thanked Barrister Paul Edeh for coming to their rescue and commended him for keeping the faith with the Muslim and Hausa Community.
“We can’t thank Barrister Paul Edeh enough, he has done something that pleases the heart of everyone in this community. We have been without power for almost a year now, and God sent Barrister Paul Edeh to help us out from this difficult situation.

“We shall jealously guard the equipment because we don’t want to go back to the days of darkness. He concluded.

Senator Abba Moro commissioned the project and performed the ceremonial switching on of the light which signaled the availability of electricity supply to the community after almost a year with the community going wild with jubilation.