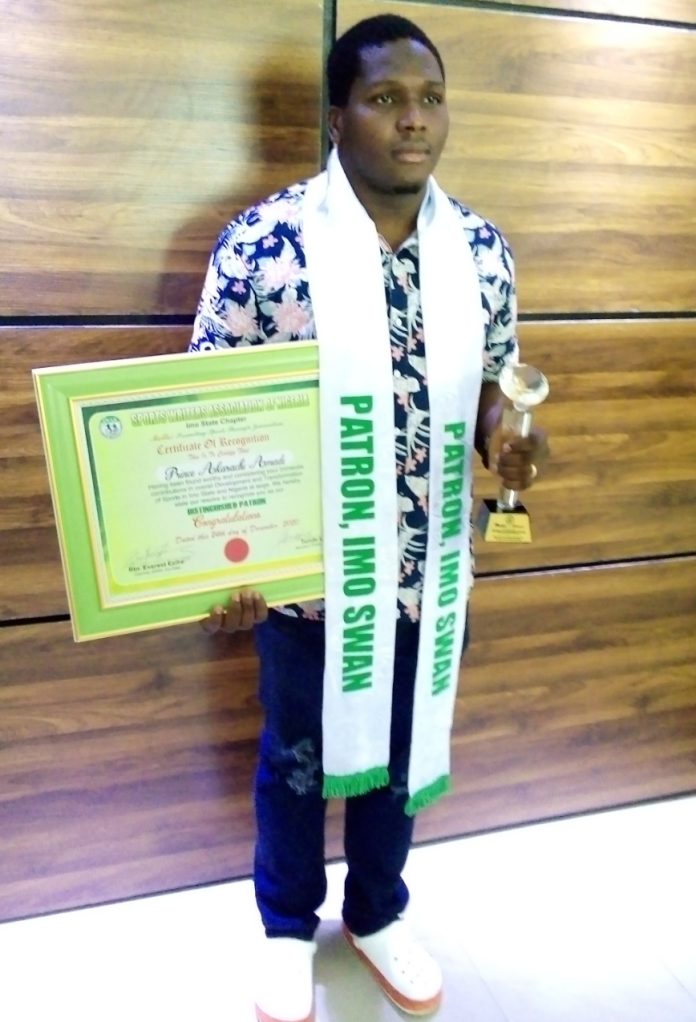 The founder and Chairman, Akarachi Foundation, Engr. Akarachi Amadi has eulogised the important role sports journalists play in the promotion and development of grassroots sports.

The young administrator who bagged a triple threats awards with Sports Writers Association of Nigeria, Imo Chapter on Thursday noted that the role of sports journalists in nation-building cannot be overlooked hence his huge respect for the revered fourth estate of the realm.

He enjoined the Sports Writers Association of Nigeria, Imo Chapter to continue to partner with Akarachi Foundation and he further called on them to give more publicity to the 2020/2021 Mbaike Unity Football Tournament which his foundation is sponsoring with over 20 million naira.

“I have heard your appeal and I will treat it very soon. The football competition that we started about a month ago we are happy with the kind of traction it has gained since it started,” Amadi informed sports journalists during the interactive session where he was named as Distinguished Patron of Imo SWAN and also as the 2020 Imo Best Grassroots Football Development Award of Excellence recipient.

“I am also happy with the support I have received from SWAN collectively and individually. But I will also call on you to do more. This competition has cost over 20 million naira. We shall be given over six million naira in prizes on the final day. The logistics, health aspect, security, outfit, and kits for the teams have cost more. Amongst the highest cost is from the publicity committee.

“I am thrilled to have these sports juggernaut in Imo State behind me and I am happy that I am now a Patron of the Association in the State which I know will open more doors.

“The competition is our project and we must all support it. I am very happy to receive the first group in my corporate office that we are trying to bring it up to the expected standards.”

Engr. Akarachi Amadi also promised to give Imo SWAN office a facelift to ensure that it conforms with the latest trend in sports reporting and casting.

“Me and Bright Ahamefula (Secretary, Central Planning Committee (CPC), Mbaike Unity Football Tournament) will devote time to come and look at the office and then consider what we can do. I assure you that the office will get a touch of Akarachi Foundation very soon,” he assured.

The philanthropist while appreciating Imo SWAN for his investiture as a Patron of the Association and also naming him as the 2020 Imo Best Grassroots Football Development with a certificate of merit to go along with it also briefed Imo SWAN of their invitation to the final of the 2020/21 Mbaike Unity Football Tournament which comes up on January 3rd, 2021 at the Emmanuel Iwuanyanwu Stadium, Iho, Ikeduru LGA.

“Thank you for the triple threats award and I am using this medium to invite everyone to the final of the 2020 /21 Mbaike Unity Football Tournament which holds on the 3rd January 2021 by 12noon at the Emmanuel Iwuanyanwu Stadium, Iho, Ikeduru LGA.

While speaking earlier, the Chairman, Imo SWAN, Everest Ezihe pointed out that Engr. Akarachi Amadi was carefully chosen after a painstaking survey which was conducted by the members association and he enjoined the Founder and Chairman of Akarachi Foundation to continue with his good works for humanity.

He promised the association’s unflinching support in the coverage of his events just as they have been doing with the publicity accorded the 2020/21 Mbaike Unity Football Tournament thus far.

Dignitaries at the event include Imo SWAN Chairman, Everest Ezihe, the Deputy Chairman, Johnkennedy Uzoma, Secretary, Tunde Liadi, and the National Financial Secretary of SWAN, Sampson Orji among other members and some aides of the Akarachi Foundation.