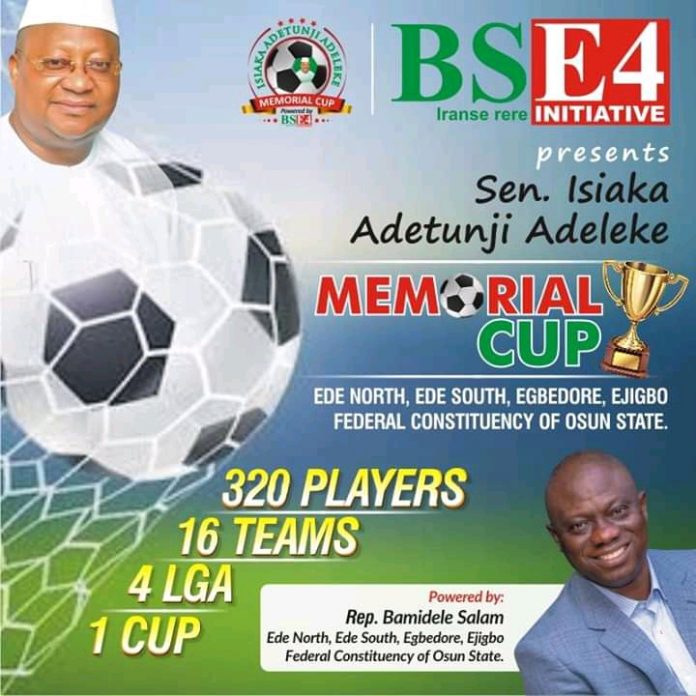 The maiden edition of the Otunba Isiaka Adeleke Memorial Football Championship will officially begin on Sunday at the Community High School, Ido-Osun from 4pm.

The tournament which is sponsored by Hon. Bamidele Salam, a member of the Federal House of Representatives, representing Ede North/South/Egbedore/Ejigbo constituency as a mark of tribute to the first executive Governor of Osun State, the late Senator Isiaka Adeleke.

According to an official release from the organisers, 16 teams across Ede, Egbedore and Ejigbo Federal constituency will participate in the competition with Awo United and Ofatedo United playing the opening match this Sunday by 4pm.

On his own part, the initiator of the Championship, Barrister Bamidele Salam disclosed that the championship is a key part of the BS-E4 initiative which was launched about a year ago.

” The competition is dedicated in honour of Otunba Isiaka Adeleke, who was the first executive Governor of Osun State. He was known to be honest, transparent, selfless and contributed immensely to the growth and development of Osun State and Nigeria as a whole,” Barrister Salam said.

“Apart from remembering the legacies of Otunba Isiaka Adeleke, the competition which will involve 16 teams in our constituency will bring up various soccer opportunities for talented young footballers across the state.”

The opening ceremony of the competition will start by 3pm, while official kick off is 4pm, special guest of honour is Yeye Dupe Adeleke-Sanni.