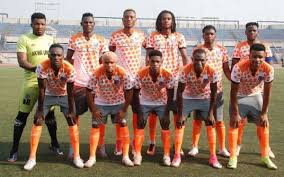 Akwa United failed to secure their second game of the season but they still moved two places up to 12th on the league table despite playing a 1-1 draw at home to Wikki Tourists in a Matchday Five tie played at the Godswill Akpabio Stadium, Uyo on Monday evening.

The game was shifted by one day from its initially Sunday because it was telecast live. Both teams came into the fixture on the back of their impressive results in the midweek games with the Promise Keepers picking a valuable point in Ilorin off Kwara United while the Giant Elephants halted the winning streak of Rivers United with a 1-0 home win Bauchi.

It gave an incline it would the route of the previous four encounters in Uyo from 2016 till date in which Akwa United have dominated with four victories and 10 goals scored and none against, when the Promise Keepers raced into the lead through their leading scorer, Ndifreke Effiong in the 22nd-minute for his third goal of the season.

Abdu Maikaba led Wikki Tourists tweaked the team formation and it worked well as Chinedu Udeagha equalised with seven minutes to halftime to make it his second goal in the last five days having scored Wikki’s solitary goal against Rivers United last Wednesday.

The Promise Keepers technical crew marshalled by Kennedy Boboye made several changes in the second half in a bid to salvage a home win but Wikki Tourists resolute defence and the theatrical display of goalkeeper, Stanley Nwabali kept them at bay until the center referee blew the final whistle to end hostilities.

It was Wikki Tourits’ first point and goal in Uyo since 2016.

Akwa United moved to 12th spot with six points from five games while Wikki remained in 16th position with five points from the same number of games.

The Promise Keepers travel to Owerri for a weekend date with Heartland while the Giant Elephants will host Jigawa Golden Stars at the Tafawa Balewa Stadium, Bauchi on Sunday.