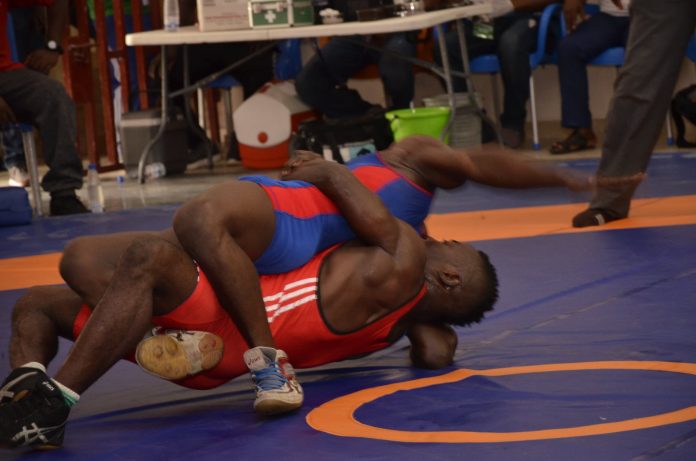 The maiden Baraza Champion of Champions wrestling tournament came to an end on Monday in Yenagoa, with Blessing Onyebuchi, Amas Daniel and teenager Mercy Adekuoroye all impressively claiming the last three gold medals at stake on the final day of the competition.

World champion in beach wrestling Onyebuchi displayed absolute class and utter dominance to land gold in the 76kg class in her first tournament in almost a year, no thanks to Covid-19 pandemic.

The 2019 African champion recorded four consecutive pinfall wins; 6-0 against Rhoda Shonde, 2-0 over Dami Ojo in just 56sec and 6-0 against Teme Deyei, before overcoming former African champion Winnie Gofit of the Nigerian Army 6-0 in the final to claim gold, to the admiration of Bayelsa State Governor Douye Diri, who graced the grand finale of the tournament.

After her victory, Onyebuchi stated that the two weeks camping organized by the Ministry of Youth and Sports in December for the wrestling team boosted her shape prior to the tournament, adding that she did not plan to win all her fights via pinfall.

“In December, our President (Daniel Igali) called us for two weeks camping. That one really helped a lot, because the kind of training I had during the camping, I can say it has been like three months back since I had that kind of training back home,” she said.

“Honestly, that was not my plan. But initially, anytime I am wrestling like this, I normally like to finish my fight in the first round because in second round, I don’t know what will happen. So, if I have my opportunity, I just take it.”

Adekuoroye, a former cadet African champion, showed great determination and resilience to record a shock 7-3 win against her more illustrious and experienced opponent in the final.

In the only Freestyle event on the final day, multiple African champion and Commonwealth silver-medalist Amas Daniel made a mincemeat of his opponents in the in the 65kg weight category to grab gold in emphatic and ruthless fashion.

The Bayelsa State wrestler came from a point down in the first round of his first bout to thrash Fisayo Kolawole 12-1 and followed that up with two 10-0 technical superiority victories against Saliu Rasheed and Ebiere Bayefa to secure a spot in the final.

In the final, the captain of the men’s national team demolished Anthony Joseph 10-0 via technical superiority to win gold, and afterwards disclosed he has been working hard to maintain his form during the lockdown.

“As an elite athlete, you know you get to do the homework,” he said. “Though we’ve been having challenges with our training together for a while because of Covid-19.

“But as an individual, I was doing the homework at home; jogging, skipping, press ups, all those kind of little, little exercises.

“And so it is not much surprise to me (how I performed), because I know how I am for now. Though it is not good enough, I need to keep going. I think it wasn’t a bad outing.”