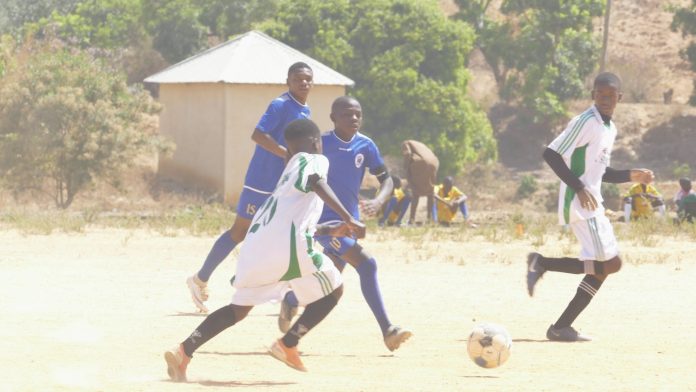 Mees Palace Football Academy (MPFA) maintained their three-point gap at the top of the Tsenba Wummen U-14 Football League, Relentless Football Academy bagged their fifth clean sheet of the season while Jr. Sporting Boys and Elspuron FA recorded important wins as Jazzy Stars were held by Highland in the U-14.

In the U-16 category second-placed, St. Monica have had their season’s winning run halted by FC Izam while Ahmed Musa’s double helped Mees Palace to an emphatic victory over Jazzy Stars. They have opened a two-point gap at the top. Kuru Young Stars, and Top Free Academy were among the biggest winners of the Week 6 of the ongoing Tsenba Wummen U-16 Football League taking place in Jos.

Destiny Lar and Weng Amos’ doubles fueled Mees Palace’s 7-0 ‘destruction’ of Invaders FA who were roundly invaded for the reigning champions’ sixth straight win of the season. They are atop the table with maximum 18 points.

Relentless FA continued to sparkle after they recorded their fifth clean sheet of the season in their 2-0 victory over Multiple Waves who slid a place down to the ninth position with nine points. Jeremiah Sunday’s first-half brace was enough to wreck Multiple Waves. They are second on the log with 15 points from five games despite having a game at hand.

Jr. Sporting Boys are closing in on the duo of Mees Palace and Relentless after they spanked Riverside FA 4-0 to retain their third spot but are level on 15 points with Relentless while Jazzy Stars earned their fourth point of the season after six matches. They were forced to a 1-1 draw by Highland FA. Jazreel Akintola put the Stars ahead in the fourth minute but Highland fought back gamely to equalise through Victor Ukeye in the 39th minute.

Elspuron FA also had the last laugh in a 4-0 trouncing of winless Hephzibah FA to move to the sixth spot with 12 points while Super Stars dimmed the light of Light FC in a 1-0 win to jump two places up to the eighth position with 10 points.

Kuru Young Stars made it two successive victories after they smashed City Rollers 4-1. Salvation Zakka, George Davou (2) and Weng Pwajok were the goal scorers for Kuru Young Stars. Sirajo Haruna reduced the deficit for City Rollers who were rolled over in the encounter.

St. Monica suffered a setback in their bid to dethrone the reigning champions, Mees Palace after an insipid goalless draw against resolute FC Izam. It was the first time this season that the second-placed team failed to score. They have lost their winning start too. St. Monica now have 16 points from as many games.

Rahbam FA moved to the third spot with 15 points from six games after they thrashed CF Bwin 4-0 while Ahmed Musa’s double for his 11th goal of the season earned first placed, Mees Palace a deserving 3-0 triumph over Jazzy Stars.

You can get full reports, facts, and figures, and the goals scorers of the Week 6 games in the U-14 and U-16 categories below as presented by Www.dasportstainment247.com.