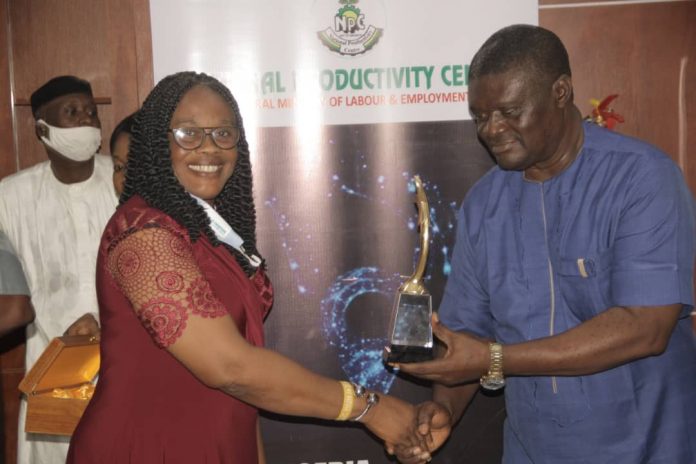 Director of Sports, Imo Sports Commission, Chief (Mrs) Chizotam Agbonma Aretola has expressed her happiness at the privilege to become the first serving Director of Sports from the Eastern Heartland to be awarded the prestigious Award of Excellence in Leadership and Productivity In Public Service and Civil Service held in Abuja on Wednesday.

The hard-working Director of Sports, Imo Sports Commission was recognised along with some other Imo indigenes based on the recommendation and tacit approval of the trip by the Imo State Government under Senator, Hope Uzodinma (Onwa Oyoko) and some other top dignitaries in the state.

She informed that representatives from the 36 States of the federation and the Federal Capital Territory, Abuja graced the two days event and that participants have been thought best global practice in leadership and productivity.

Chief Mrs Aretola told www.dasportstainment247.com that she learned new things at the leadership and productivity summit held in Abuja and that she hopes to start internalising what she gleaned to help develop sports in Imo State and she was full of gratitude to the Imo Governor, Senator Hope Uzodinma and others that made the trip possible.

“It was held in Abuja on the 24th and 25th of November at the National Productivity Centre and we were conferred with Award of Excellence of Leadership and Productivity in Public Service and Civil Service by the Nigerian Government,” Chief Mrs Aretola told www.dasportstainment247.com.

“I was nominated by the Imo State Government under the leadership of distinguished Senator, Hope Uzodinma and the Head of Service. It was a very big event and some other Imolites were also recognised.

“I am so elated because it is the first time a Director of Sports from Imo State will be so honoured. It is a very feat for Sports in Imo State. The award will spur me on to do things that will improve sports development in Imo State. I will bring to the fore all that I have been thought at the Leadership programme. We had lectures on leadership and productivity.

“I want to thank the Governor and others that made it possible for giving me the opportunity for nominating and approving me to go for the programme. The Head of Service, Dr Chibuzor Iwuagwu. We had a two day summit and on the second day we were awarded. It was organised by National Productivity, Leadership and Professional Ethics.”

Some of the other recipients of awards at the programme from Imo State were Permanent Secretary for Establishment, Pension and Training, TUC Nwokonkwo, Principal Secretary to the Governor, Dr.Mrs Irene Chima, the Owerri Capital Development Authority head, Honourable Ikpeamazie, Permanent Secretary, Office of the Secretary to the Imo State Government, Lady Ibeh Agim, former Director General, IBC/ Orient FM, Barrister Ezekiel Opara among others.