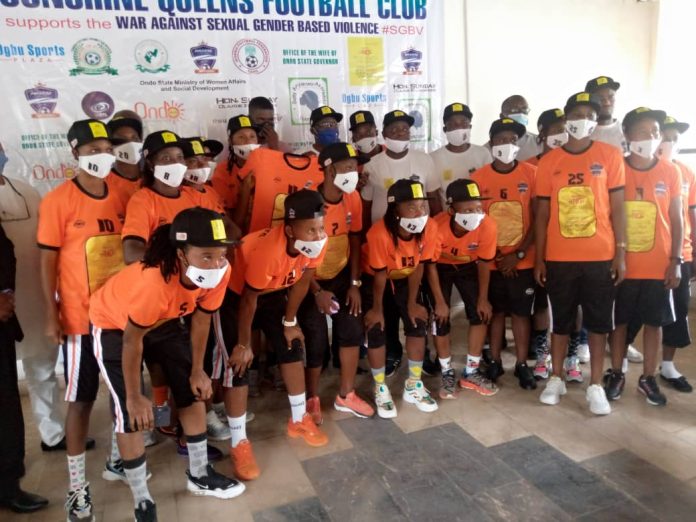 The Nigeria Women Professional League Premiership side, Sunshine Queens Football Club of Akure, on Monday, declared support for the war against gender-based violence being championed by the Betty Anyanwu-Akeredolu Foundation (BAF).

BAF is one of the pet projects of the Wife of Ondo State Governor, Mrs Betty Anyanwu-Akeredolu.

The Coordinator of BAF, Mr Austin Otabor, said that the foundation was happy about the decision of the female premier league side to help prevent gender-based violence, in whatever form.

Otabor said that the foundation believed that gender-based violence could best be tackled by preventing it from happening.

This, he said, was why the campaign had been taken to secondary schools by distributing the informative and protective cards to students, particularly the girls.

The Commissioner for Sports and Youth Development, Dotun Owanikin, hailed the initiative, saying: “today, apart from the footballers, we have also joined the war against gender-based violence. This is a noble cause.”

Owanikin also urged the players to start to project themselves as ambassadors of the fight against gender-based violence.

Also, Tunde Ogunja, acting Chairman, Ondo State Football Agency, the parent body of Sunshine Queens, said that the team and the agency would give total support to the campaign.

The Head Coach of Sunshine Queens, Wemimo Matthew, advised the foundation to partner with other sports aside football in order to promote and improve the fight against the menace.