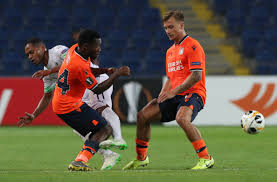 Azubuike Okechukwu’s Istanbul Basaksehir were celebrating their first Super Lig title at the end of last season but they have been abysmal in their title defence and are currently battling against relegation.

Their unimpressive performance has already had the coach that delivered the league title, Okan Buruk’s appointment mutually terminated and a new coach, Aykut Kocaman was Monday unveiled as his replacement barely two days after they were thrashed 5-1 by newly promoted, Hatayspor at home.

While speaking during the unveiling the new coach, Kocaman expressed his happiness at being a part of the champion Başakşehir family.

Kocaman baptism of fire is tonight’s away game at Galatasaray who parade another Nigerian, Henry Onyekuru who scored two goals on his debut for his new team. Basaksehir are on the 15th spot with 24 points from 21 games while Galatasaray are third with 42 points from the same number of games.

The new helmsman is taken over at a difficult time due to the club’s league ranking and injuries too.

Nimrod: Sports Is An Industry For Human Development