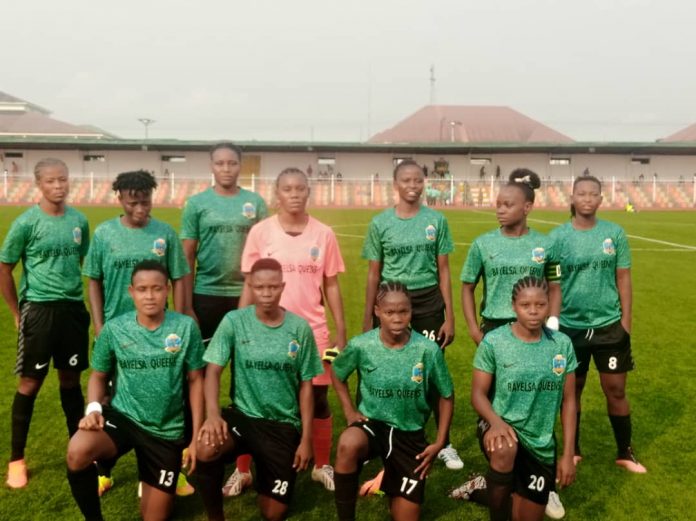 The Nigerian Women Football League (NWFL) Premiership Matchday Four tie between Bayelsa Queens and Confluence Queens at the Samson Siasia Stadium in Yenagoa lived up to its billing as as an encounter with the touch of a top class fixture.

The Lokoja based side were quickest to settle of the teams as they carved open their opponent particularly in the middle of the field with intricate sleek passes and it was no surprised when Confluence Queens’ Nkechi Agam scored the curtain-raiser in the tenth minute off a slack defending from the defenders of Bayelsa Queens.

The goal was the catalyst the Gloryland Girls needed to wake from their slumber as the introduction of Anjor Mary for Charity Reuben quickly paid off when skipper Joy Jerry lashed unto a cross to level parity in the 43rd minute.

The equalizer for Bayelsa Queens turned on the heat for the visitors when the Goalkeeper for Confluence Queens handled the ball of the foot of Anjor Mary outside the box in added minutes of the first half to get a red card.

The second half saw a more determined Bayelsa Queens using the numerical advantage to pin their opponent to their half of the field which resulted the the hacking down of playermaker Anjor Mary in the 63rd minute for a penalty which she converted to send the crowd into rapturous jubilation.

Technical Adviser of Confluence Queens, Whyte Ogbonda was full of praise to his girls for putting up a hard fight and ensuring that the Restoration Ladies did not get three points on a platter but noted that the red card affected them in the second half.

On his part, Moses Aduku Coach of Bayelsa Queens stated that his team was still a work in progress and bemoaned the wasted chances. But thanked God for giving them the 3 points which keeps them at the summit of the league table.

Unity Preseason Tourney: Nasarawa Utd, Lobi Stars and 4 others through...