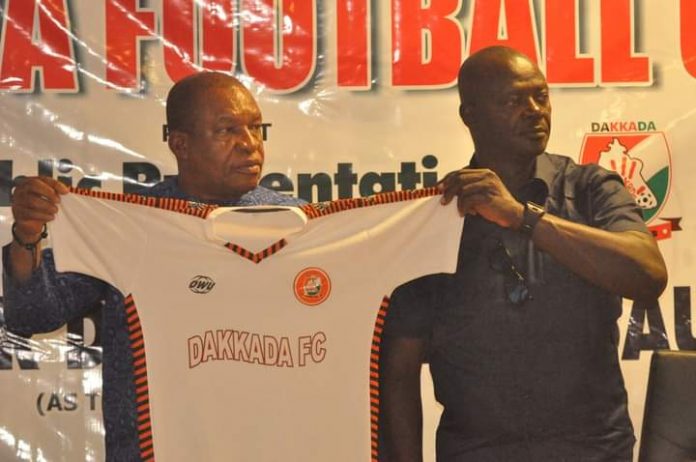 Dakkada Football Club have named Umar Danlami Kwasau as their new head coach after their failure to renew the contract of erstwhile coach, Caleb Esu.

The Kaduna-born, former FC Taraba, Kada City, and Delta Force gaffer takes over from Coach Caleb Esu and his contract runs till the end of the season.

Speaking during a brief unveiling ceremony which was also used to present to the public Dakkada’s new home and away kits, at the Conference Room of the Nest of Champions, Uyo, Thursday, the Chairman of Dakkada Football Club, Coach Aniedi Dickson, expressed delight at being able to secure the services of the “experienced football tactician” and urged him to bring his technical and tactical savvy to the fore in the discharge of his duties in order to bring glory to the football club in the upcoming 2020/2021 Nigeria football league season.

Mr. Dickson who noted that the move was made so as to fortify the technical department of the team also posited that the new Head Coach will be given the “freehand” to operate and solicited the support of relevant stakeholders from within and outside the state to enable him to succeed on his new assignment.

In his Goodwill Message, the Senior Special Assistant (Sports) to the Governor of Akwa Ibom State, Elder Paul Bassey, who represented the Honourable Commissioner for Youth and Sports, Sir Monday Uko, as Special Guest of Honour during the ceremony, enjoined the new Head Coach to leverage the warmth and hospitality which the state presents to succeed and advised him to run an all-inclusive tenure.

In his response, Danlami said he was ready to immediately hit the ground running at his new job and pledged to work assiduously with members of his new technical crew to churn out positive on-and-off-the-field results.