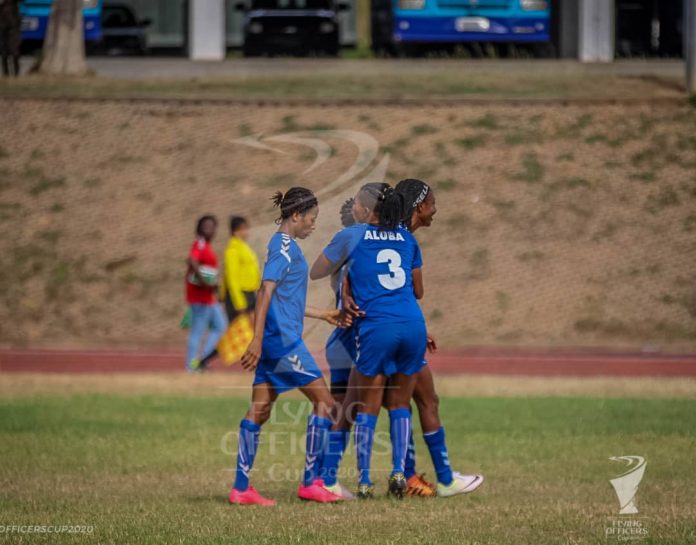 Edo Queens, the reigning champions of the Flying Officers Cup and Bayelsa Queens picked the last two semi-final tickets on Thursday as the group stage of the foremost women’s pre-season tournament ended in Abuja with frenzy and goals galore.

Www.dasportstainment247.com brings to you a wrap of the last group games played at the Guards Brigades Stadium, Asokoro, Abuja on Thursday.

The Crocodile Ladies became the whipping team of Group A after they let in four goals against Royal Queens on Thursday. It was the third successive game they had been beaten emphatically and they conceded 12 goals without scoring any as their tournament came to an abrupt end at the Guards Brigades Stadium, Abuja.

Kaduna Queens started the game with Royal Queens poorly and by the fifth minute they had conceded three goals through Rosemary Adesina and Chika Idika (2) goals in the first, third, and fifth minutes. They did step up their game in the second-half keeping the Warri Ladies at bay for most part of it but they still allowed a fourth goal scored by Chioma Olise in the 83rd minute for her second goal of the tournament.

Bankole Olowookere couldn’t guide his players to third successive win as Naija Ratels crumbled to a 1-0 defeat to the tournament’s defending champions, Edo Queens on Thursday at the Guards Brigades Stadium, Asokoro, Abuja.

Naija Ratels had beaten Kaduna Queens and Royal Queens to qualify for the semi-final ahead of others but they lost steam against Edo Queens who pipped them through the strike of Jumoke Alani in the 68th minute. The win by Edo Queens was also enough for them to displace Naija Ratels at the top of Group A.

Edo Queens topped the group with seven points from three games and they set up a Saturday semi-final duel with Bayelsa Queens while second placed Naija Ratels have a date with Nasarawa Amazons in the other semi-final clash also billed for Saturday in Abuja.

Both teams knew their fate before the start of the game played in Abuja. Nasarawa Amazons tidied up their part in the opening two games against Confluence Queens and Honey Badgers which they managed to win even while not at their best.

Knowing that they had the semi-final ticket in the bag made head coach, Christopher Danjuma to instruct his players to enjoy their game against Bayelsa Queens on Thursday with a possible rematch in the final in the offing. Bayelsa Queens on their part were fortunate to stage a comeback against a determined Confluence Queens a few days earlier. The Restoration Ladies needed to avoid a defeat against Nasarawa Amazons to pick the last four ticket.

Both settled for a goalless draw and Bayelsa Queens joined Nasarawa Amazons in picking the two semi-final slots in Group B while Confluence Queens were made to rue their profligacy in their games with both teams.

Confluence Queens exited the Flying Officers Cup 2020 in grand style with a thorough mauling of Honey Badgers in their last group game played in Abuja on Thursday.

Joy Omewa would feel hard done by the manner of their elimination after they had just defeated Honey Badgers 7-0 in a one-sided encounter where she scored five goals in obviously her best game of the tournament.

It was Omewa that began the Confluence Queens onslaught with the opening goal in the seventh minute before Augusta Nnaneme doubled the lead in the 16th minute. Omewa notched two more goals in the 20th and 31st minutes to get her hat-trick before halftime.

Martha Peter scored the fifth goal in the 34th minute to ensure they were 5-0 up at the end of the first-half. Omewa made it her show in the second half with two further goals in the 85th and 87th minutes to make it five goals in a single game. The striker thus scored six goals in three games as Confluence Queens return back to Lokoja to reflect on what must be done to enable them hit the ground running when the NWFL premiership season commences next month.