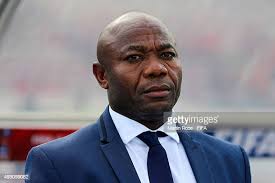 Poised by his immense contributions to the growth of football in Nigeria and the world at large, the Imo State Football Association(FA) has given a prestigious honorary membership award to Emmanuel Amuneke.

Reverend Divine Eche was also honoured with the Ambassador of Football Excellence award.

The awards were overwhelmingly endorsed by members of Imo Football Association (Imo FA) during their just-concluded 2021 Ordinary General Assembly held in Owerri at the Mini-Conference Hall of Imo State Christians Association of Nigeria (CAN) was presented to them by Dr. Amanze Uchegbulam, the State FA Chairman.
Amuneke who was inadvertently absent was ably represented by Emeka Amajiriaku, the owner of ASJ Academy, Owerri which produced Kelechi Nwakali, while Rev. Dr. Divine Eche physically collected his award which he described as the best among all the awards he has ever received in life.
Amuneke is an Ex- International of high repute who won the 1994 African Cup of Nations with the Super Eagles and represented Nigeria at the World Cup was also CAF Player Footballer of the Year in 1994 and now works in Egypt with Misr El-Maqasa while Rev. Dr. Divine Eche, the Imo State Chairman of Christian Association of Nigeria (CAN) has been a Chaplain and Spiritual Director of  Super Eagles and Enyimba International FC, Aba, a position he divinely held and God used him mightily to uplift the teams within the periods of much-needed victory suspense.
Responding, Amuneke expressed satisfaction with the Honorary Membership and he assured Imo FA of his willingness to advance the vision and mission of the Association while Rev. Eche in an emotion-laden speech lamented that what he was denied in the Presidency by enemies of progress had now been rewarded him by God through the Imo FA.
The highlight of the occasion was the election of a substantive Vice Chairman of the Association by the 25 delegate members in attendance. The contest was with the incumbent though an acting Vice-Chairman- Barr. Ifeanyi Bindel Dike and  Ochiagha Emmanuel Anayo, a member of the Association’s Executive as well as Board member of Heartland FC, Owerri.
Though Ochiagha was absent the electoral committee was asked by Congress to conduct the election as scheduled. The voting was through secret balloting and was officiated by Comrade Eric Ihentuge at the end of the vote-counting Barr. Dike floored   Ochiagha by 24 votes to one.
The election was considered free, fair, and transparent as Barr. Dike Ifeanyi (Fela) was declared the winner and was presented to the happily charged Congress by Dr. Amanze Uchegbulam for further rectification and acceptance, which was overwhelmingly endorsed through their voice responses.