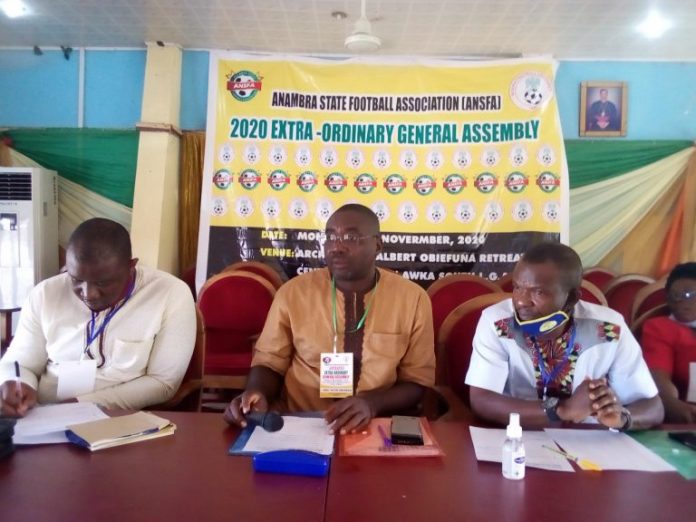 Chikelue Iloenyosi chairmanship candidate in the Oct.30 board election has a new hurdle in his bid to head the board as the an Extra Ordinary General Assembly Anambra State Football Association (AnSFA) on Monday resolved that his appeal on the election was invalid.

The assembly said Iloenyosi did not pay money either in cash or electronically to the FA which runs foul of Article 244 of the AnSFA statute 2015.

The congress was made up of Victor Aniekwena, vice chairman and three other elected board members as well as 20 of the 23 Congress’s members were present at the assembly.

Recall that Iloenyosi ran as a sole candidate for the position but was not returned for not meeting up with the simple majority of votes cast as stipulated the electoral guideline.

The Election Appeal Committee had sat over the appeal and decided that the election was valid and that Iloenyosi did not win but further directed that a runoff election be conducted within 14 days with effect from Nov. 16.

The Appeals Committee aresolved through a motion that only those who have cleared for the election should stand for the second ballot.

The assembly also resolved that that a bye-election should be conducted to fill in the five vacant positions of the nine man electoral board and three Local Government Football Councils around February 2021.

The AnSFA assembly commended the Rev. Fr Dike led electoral committee for a good job and urged it to round off the task as resolved early next year.

Earlier in his speech, Aniekwena assured Anambra football community of a busy and competitive football year for both male and female in 2021.

He said Anambra State Football League for both men and women themed ‘My Anambra football’ Super 8 Tournament would be unveiled for the purpose of developing grassroots football adding that there was a sponsors already.

“From the first quarter of 2021 we will set the ball rolling, we engage our elite Clubs and get them prepared adequately for beginning of each season we will introduce Anambra State Gold Cup which will commence from next pre-season,” he said.