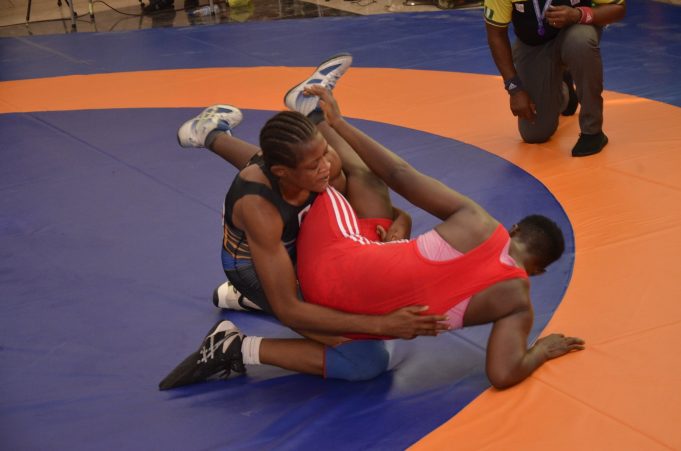 World number two Odunayo Adekuoroye lived up to her high billing, ruthlessly claiming gold at the maiden Baraza Champion of Champions wrestling tournament in Yenagoa, even as favourites John Ogbonna and Welson Ebikewenimo triumphed on Day 1 of competition on Saturday.

Competing in her first bout in almost a year, reigning Commonwealth champion Adekuoroye showed no sign of rustiness, cleverly and masterfully brushing aside her three opponents in the 57kg class to land gold.

The 6-time African champion defeated Patience Kakaga and Esther Kolawole, who stepped up to 57kg, 10-0 via technical superiority, before finishing off Aboje Isioma of Delta State 2-0 via pinfall inside the first round.

Having being away from competition for almost a year, the Ondo-born wrestler hailed the president of the Nigeria Wrestling Federation (NWF) Hon. Daniel Igali for coming up with the tournament.

“Kudos to our President for organizing this competition,” she said. “Because if you are just training, training and acquiring knowledge without being to competition, I think it is meaningless.

“The competition here has really added value to our wrestling and preparation for the African Championships and Olympic qualifiers as well.”

In the 50kg category, youngster Kadijat Idris caused a massive upset on her way to victory.

Expressing delight on his win, Ogbonna disclosed that he has been working hard privately during the lockdown last year to maintain his form.

“During the lockdown, we have been doing small, small things at home,” he disclosed. “Because it is not easy to leave wrestling like that for a long time.

“So, we have been doing small, small things at home, training gradually. Even in my personal house, I do train.

“I thank God because it’s being long since I last won gold. It’s another testimony, and I am grateful for that.”

Perhaps, what turned out to be the bout of the night, was the encounter between Ebikewenimo Welson and Simeon Enolumimi. The experienced Welson came from a point down to stage a comeback 4-1 win in their 57kg final to clinch the gold medal at stake.

Both wrestlers thrilled the small amount of audience inside the ultra-modern Dynamite Wrestling Complex and the spectators watching from the big screen outside with dogged and gritty performances.

After his victory, Welson stated that he was always confident of winning the bout despite going down 1-0 in the first round.

“The final was a very tough fight, but I know he is somebody I met always. We always fight in the finals, but as far as I have a coach that can do that for me, no problem,” he said.

“Maybe, I don’t know, others can be afraid, but if you take a point from me in the first round, you are finished. From there, I can bring out everything I have in my body.”

Action continues on Sunday in both Women Wrestling and Freestyle events.

Commonwealth champions Blessing Oborududu and Aminat Adeniyi are the headliners in WW 68kg and WW 62kg respectively, while former African champions Soso Tamarau (97kg) and Ekerekeme Agiomor (86kg) are expected to show class on Day 2 of competition in the Freestyle events.