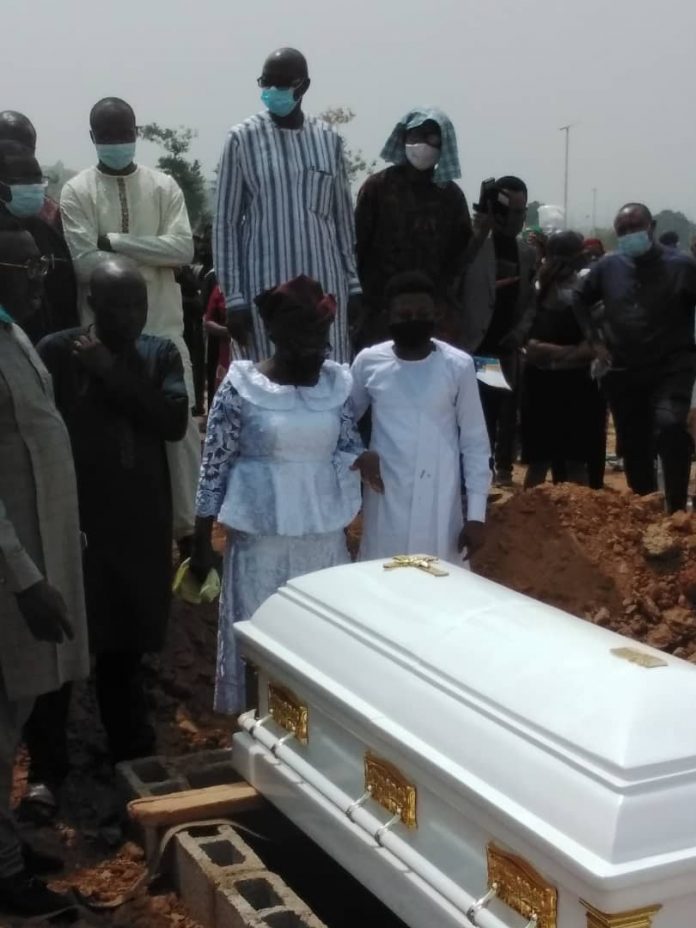 The name, Jesuit Onwuamaeze (death knows no king), conspicuously inscribed on the epitaph beside the dusty road inside the Gudu Christian cemetery, was enough reminder of the eminence of the journey of no return awaiting every living soul.

Measuring several acres inside the sprawling land, the cemetery has been the permanent abode for Professors, Doctors, politicians, administrators, journalists, businessmen and pastors, the mighty and ordinary mortals that once hold forte as men and women of valour and as timber and calibre.

The ambiance and atmospheric was a mix-grill of mourners in coat of many colours. Some appeared in white, many in black, and others just off colours. The stream of mourners, numbering over a thousand had converged to escort different persons on the journey to eternity. For some, their sorrowful faces did not leave anyone in doubt of their mission to the cemetery, yet for others, it was more than an agony.

While very few cried, others displayed infectious smiles, just as others casually threw banters, understandably having not seen for many years. The mien may differ but the mission was the same for all of us. It was gathering of friends, active and inactive sports writers, past and present executives of SWAN, office colleagues, church and musical band mates.

In fact, it was a roll call of who must and ought to be there. Richard Jideaka, Ezeocha Nze, Wale Alabi, Ben Nwachukwu, Elder Osaz, Kayode Adeniyi, Wale Ajimotokan, Ndubueze Chidoka and his SWAN FCT exco, Victor Ireole, Tony Ezimakor, fully recovered Prof Fidelis Ebu, Mike Ndidi, SWAN ladies, the FCT NUJ Chairman, Comrade Emma Ogbeche, Editor per excellence, Yusuf Alli, the SAs to Ministers of Sports, and Humanitarian Affairs, JJ Akanji, and Nneka Ikem-Anibeze, respectively and the Director of Grassroots Sports in the Ministry of Sports, Dr Ademola Are among many others.

We had all gathered to witness the final internment of our friend, brother, husband, father, Segun Ogujimi, the one we fondly called Segele, Segee or Tungba.

Those that came prepared to tearfully bid him goodbye buckled under that strong appeal from the Senior Pastor, Redeem of Christ Champion Church, Pastor David Praise.

The Pastor was explicitly blunt in his short, sharp sermon, releasing ironically a punchy one. “We thank God in a situation like this,” he shocked the mourners already traumatised and overwhelmed by the beautiful white casket that will perpetually house Ogujimi’s remains.

“Physically speaking, this is the end of life for Elder Segun, but spiritually, it is the beginning of his life journey,” he quipped. As the mourners were trying to assimilate and allow the message to sink, he demanded that somebody reads Revelations 14:13.

“Then I heard a voice from heaven saying unto me, write this down; blessed are the dead who die in the Lord from now on. Yes, says the Spirit, they will rest from their labour, for their deeds will follow them,” the verse reads with the pastor emphasising each word and sentence.

“I am glad to announce to you that our brother, friend, husband, elder, is not dead, but resting from labour. Our concern should be when and how we will rest from our own labour like Segun that has entered into peaceful rest. Our joy is that his rest is gainful… He is no longer worried about attacks of Boko Haram, kidnapping, face mask and COVID-19 pandemic like you and I.

“Where he is right now is party, party and more party. Heaven was quiet when his birth was celebrated, but rejoicing now that he has returned. I understand our gloomy faces, our pains, our sorrows, but you can only do that when you don’t have Christ. My prayer for every one of us here is that the angels will also gather to gain you as they gained Elder when your time comes,” he concluded in line with his promise to wrap up in just three minutes.

“Take her to church how…, was that all she could say,” many asked scornfully. But for those not moved by the disposition of his widow, Segun’s elder brother was the real professional mourner.

Speaking largely in Yoruba but courtesy of the interpretation from the chairman APC Press Corps, Jide Orintunsin, he had complained that Segun got it wrong abandoning home, warning others not to emulate his behaviour.

“Segun lived an upright man. He was a straightforward person. You can never tempt him with money or women and expect him to fall…,” he quipped emotionally, allowing the tears cascading down uncontrollably.

As the busy undertakers deployed the shovels and other implements of burial, so many other dug graves had steered invitingly at everybody, reminding us the imminence of our journey to eternity.

Beyond every other distractions, I was too fascinated with the busy schedule of the undertakers, watching them jumping from one grave to the other. “Can they actually run out of business, how lucrative are the employers in the cemetery, how innocent are they in the speculated shoddy scary underground sharp midnight practices at the graveyard?

As we bid final farewell to our fallen colleague, the pastor’s comment that ‘Elder Segun has gone to enjoy’ kept ringing loud bell in my memory. It sounded like the comment by his Editor, Yusuf Ali, during the service of song, organised by the FCT NUJ this week. He had noted that Segun lived and died catering for his family and that he has never seen a journalist perpetually broke like him.

None of those with emotional tribute for him could not but align with the brother. Segun was anything a womaniser. His wife lived almost all through in Ghana yet you cannot identify Segun with any lady. Again, I could not but concur with the pastor that he actually needed a deserved rest to enjoy.

“I just sent $1500, I paid $1000, I transferred $500 to my son in the university in Ghana. I am running around to see how I can raise money to pay my son’s school fees in Ghana; this racket proceed can help me pay my son’s school fees ooo,” Segun had always told every ear that cared to listen since 2011, I first met him, after my transfer to Abuja from Lagos.

I had looked round in search of the ex-internationals Segun launched into stardom, but lamentably saw none. I had scanned for the administrators, coaches, players he diligently served selflessly, but only saw pockets of their aides. And in reappraising the situation, I had asked, is this job worth dying for?

As the elders of Abuja SWAN retrospect on the rough marathon race of life so far and those that have fallen by the way side, heroes and quintessential sports writers like Ramsey Ugeli, Bolaji Oni, Hyacinth Umeh, among others had readily come to mind.

What can I say, in the brief period of time we stood reflecting on our life journey, no fewer than four ambulances had arrived the cemetery with lifeless bodies for burial.

But like the preacher man directed, “any of you that has not received Christ, to be in the right moral rectitude must do so now.” When we attend burials, we go to honour ourselves and mark present for the dead unaware of our presence because we know not when it will be our turn, for this life is transcient.

‘Why I set up Football Kiddies Camp,’ Maureen Mmadu explains