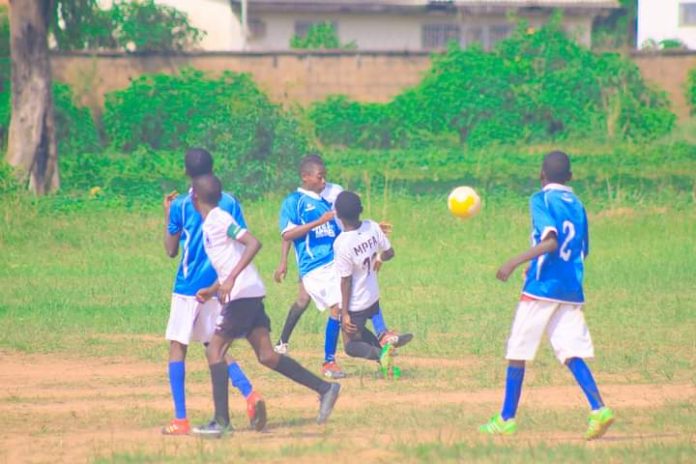 Youngsters on the Plateau had a memorable midweek that they won’t like to forget in a hurry after Weeks 16 and 17 fixtures went down in the Tsenba Wummen U-14 & U-16 Football League on Tuesday and Thursday at four designated centres in Jos.

With the exams over and the long holidays in the offing, the organizers of the league decided to add midweek games to the roster to ensure the season runs its normal course without any interruption.

In the Under 14 cadre which produced 80 goals across two matchdays from 20 games, the title quest continued to be a ding dong affair between reigning champions, Mees Palace FA, and unrelenting Relentless FA. Both picked up two crucial victories each to maintain first and second position with 47 and 45 points respectively after 17 games while Jr. Sporting Boys, Elspuron, Highland Stars, and Multiple Waves recorded impressive results to remain in the top half of the table.

In the Under 16 category where 65 goals were plundered from 20 games played midweek, St Monica’s FA cut the gap between them and second-placed, FC Izam to a point after two key wins while Mees Palace FA increased their lead on second-placed FC Izam to eight points to dictate the pace in the first spot with 51 points from 17 games. Rahbam FA returned to winning ways after the Tuesday thrashing in the hands of the reigning champions while Kuru Young Boys, Jazzy Stars, and City Rollers boosted their top-five finish chances with consecutive wins in the midweek duels.

Weng Amos and Japhet Vincent’s double each fueled Mees Palace FA’s 7-0 win over Riverside FA. The victory kept the Black Panthers’ slim two points advantage at the top over Relentless FA. They have 47 points from as many games while Relentless defeated sixth-placed Vet Glory 7-0 in a game Matthew Peter scored four goals. They had earlier, on Tuesday pipped Jr. Sporting Boys 3-2 and now have 45 points from 17 matches to remain second on the log.

Light FC moved to the 13th spot with 19 points after picking four points out of a possible six in the midweek games. They followed up a 3-0 win over 19th-positioned Invaders with a 4-4 draw against 17th-placed Young Reformers. Light FC’s Uhnei Jonathan stole the show with a hat-trick while Madek Gabriel and Clever Joseph contributed a brace each for Young Reformers in a game they squandered a 3-0 lead.

Highland Stars whipped Invaders 3-1 to remain in the fourth position with 33 points from 16 games. Elspuron woke up from their recent slides to beat Super Stars (2-1), and Jazzy Stars (2-0) to leap back to the fifth spot with 33 points also.

Jazzy Stars lost consecutive games for the first time in recent games to slump to the 10th spot with 24 points after Young Champions upset them 1-0. Young Champions’ fifth win of the season saw them retain their 15th spot with 18 points.

Meanwhile, Multiple Waves broke into the seventh spot with 28 points after impressive double wins over SJC Lions (3-2), and Hephzibah (4-0) among other results which are provided with statistics below after the review.

Samba Boys walloped FC Sports 4-0 to recover from their 2-1 loss to Kuru Young Boys on Tuesday. Abdulmulsif Ahmad scored three goals in the FC Sports’ mauling. Samba Boys are in the 11th spot with 20 points from 16 games.

FC Izam held on to the second spot with 43 points from 17 games but they stumbled slightly in the title race after they were held to a 2-2 draw by the Galatians FA who led 2-0 at halftime before FC Izam rallied back to equalise in the second half to protect their unbeaten start to the season. They are only a solitary point better than third-placed St. Monica who beat Royal Stars (2-0), and CF Bwin (3-0).

Mees Palace FA thrashed Yard FC 3-0 to maintain their perfect start to the season. They have opened up eight points gap at the top with second-placed FC Izam on 43 points.

SJC Lions leaped to the seventh spot with 29 points after they picked valuable six points from games with Mabo Young Stars (6-2), and Tin City FA (3-0) while Rahbam FA pipped Flying Shooters 2-1 barely two days after losing 4-0 to Mees Palace FA. They are fourth on the log with 35 points from 17 games.

City Rollers have won consecutive games for the first time this season after they hammered Adalchi and Mabo Young Boys 3-0 each in the two games played midweek to jump to the ninth spot with 23 points.

Read below the comprehensive results of Thursday games and the goals scorers.