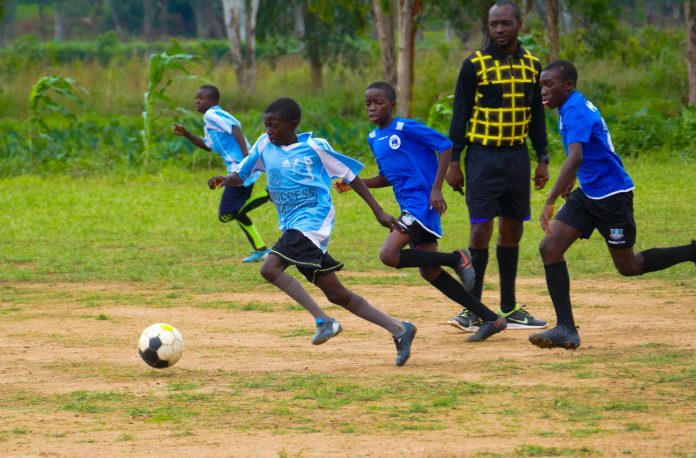 The second round of the Tsenba Wummen Under 14 and 16 Football League taking place in the North Central region of Jos, Plateau State took off as expected last weekend and it witnessed more heartwarming results and more goals plundered as Week 20 fixtures were negotiated across the four-match venues.

After a near-perfect start to the season, reigning champions, Mees Palace Football Academy suffered a surprise loss to Multiple Waves. Relentless Football Academy avenged their Week 19 defeat to Highland Stars while against all expectations Riverside FA recorded a shocking victory over Elspuron FA in the Under 14 category for their second win of the season.

In the Under 16 cadre, Mees Palace FA continued their unbeaten start to the season and have further widened the gap on their closest rivals: St. Monica’s Football Academy and FC Izam who were beaten by lightweight opponents last weekend.
Kuru Young Stars, Tin City, Rahbam FA, and CF Bwin also bagged important wins to improve their lot on the table.

Under 14 Wrap
34 goals were scored last weekend in eight games and the highlight of the matches played was the shocking loss of Mees Palace to 10th placed Multiple Waves. There is a huge 19 points gap between both teams but that did not deter Multiple Waves from creating an upset and moving to 31 points as against 50 points for Mees Palace who dropped to the second spot with a game in hand against the same opposition.

Multiple Waves netted twice in the first half through Simon Linus and Goodluck Samson in the 15th and 22nd minutes and by the time Mees Palace could know what hit them, time was gone. Alvin Ajik got a consolation goal for the reigning champions in the 49th minute as the tie ended 2-1. Mees Palace have now been displaced off the top of the table to the second spot by Relentless FA who now have 51 points.

Relentless FA bashed Highland Stars 3-0 who only penultimate weekend ago beat them 3-2. It was sweet revenge. With the surprise defeat to Mees Palace, Relentless FA have climbed to the top of the table with 51 points from 20 games but they have played a game better than the deposed league leaders.

In the other games, Young Champions avenged their 3-1 loss to Ceemonie SA with a 3-2 victory while Super Stars, Gangere Youths and Young Stars secured a double win over Invaders, Light FC, and Hephzibah in that order.

Riverside FA got their second win of the season to move to patry eight points from 60 after they pipped Elspuron FA 2-1. Elspuron had beaten the same Riverside 2-0 in the last game of the first stanza. The latter has now jumped to the 18th spot while Elspuron are still in the fifth spot with 36 points.

SJC Lions toppled Top Free Academy 3-0 to remain in the 13th spot with 25 points from 17 games. Jazzy Stars held lowly Young Reformers to a 1-1 after the latter had beaten them 2-0 two weeks ago. Jazzy Stars and Young Reformers are 11th and 17th respectively with 28 and 17 points in that order.

Week 20 produced 32 goals from the eight matches decided in this cadre. The most interesting result of games played was the 4-1 comprehensive whiplash of second-placed, St. Monica’s Football Academy by Samba Boys. The same fixture ended 1-0 in favour of St. Monica two weeks ago.

It was a massive turnaround that has also extended the gap between the leaders, Mees Palace and St. Monica to nine points even when the reigning champions have played a game less. Mees Palace with Ahmed Musa back in scoring form thrashed Galatians FA 3-1. They have cemented their place at the top to 57 points from 19 games.

Umar Adam netted twice for Samba Boys in the 4-1 mauling of St. Monica. The former has moved to the 11th spot with 26 points from 19 games as a result of the extraordinary win while St. Monica remain in second with 48 points.

FC Izam who are currently third with 43 points from 20 games failed to capitalise on St. Monica’s slip to reduce the five points gap between them after they were beaten by Flying Shooters for the second time in the last two weeks. It was their third successive defeat too after going unbeaten in the opening 17 matches of the season.

Kuru Young Stars and Rahbam FA defeated Adalchi FA and SJC Lions respectively to maintain fourth and fifth spots with 44 and 38 points in that order while Jazzy Stars dropped a place to the ninth position with 30 points after back to back losses to Tin City FA who replaced them in the eighth position with the same 30 points from 19 games but ahead because of superior goals difference.

Top Free Academy halted a spate of poor results with a 3-3 draw away to Jeddy Academy with Samuel Aputeze hitting a brace. The same Jeddy had won this fixture 3-2 two weeks ago.