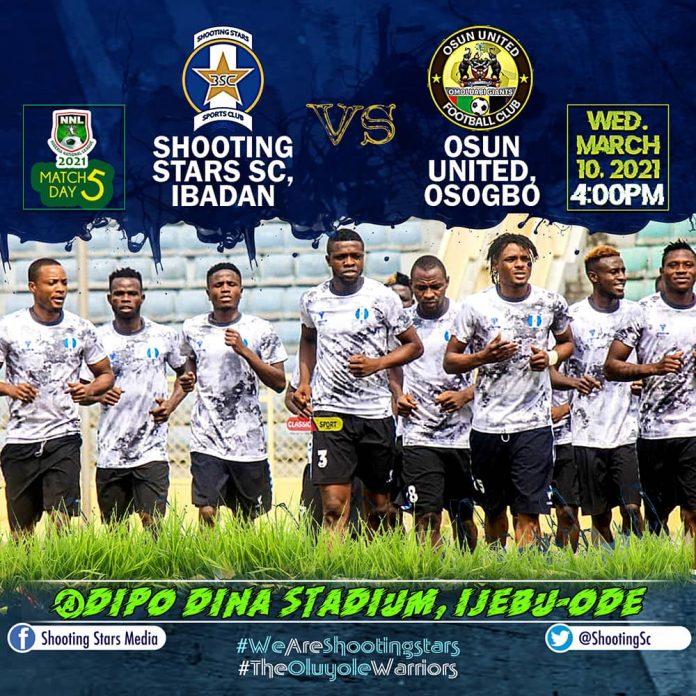 Nigeria National League (NNL) Group B1 table toppers, Shooting Stars Sports Club (3SC) of Ibadan, are primed for yet another win as they play host to Osun United of Osogbo.

The Match day five midweek cracker, billed for the Dipo Dina Stadium, Ijebu-Ode, apart from being a derby, is also a clash between the first two teams on the log and a tie between the only unbeaten sides in the group.

Based on that and coupled with their current form, which has seen them become a terror to other teams in the group, the Ibadan soccer lords look good to grab another maximum points.

From every statistic on ground, the coach Bright Omokaro tutored United will have no room to hide against the victory thirsty Shooting Stars, who seem not ready to drop any point in the campaign.

Shooting Stars are far ahead of Osun United in all department, having scored nine goals as against United’s six and have let in just one goal while their opponents have retrieved the ball from their net on four different ocassions.

The Stars have won all their four previous matchex while the Omoluabi giants have managed to wn two and drew two. Above all, four points separates the two gladiators on the log, going into this game with 3SC having 12 maximum points as against United’s eight.

Considering the words of Chief coach of the Oluyole Warriors, Edith Agoye, that his side have put behind them the 3-0 away victory over Stationery Stores last weekend in Lagos and are focused for another win in this midweek tie, the visitors will definitely return to Osogbo in defeat.