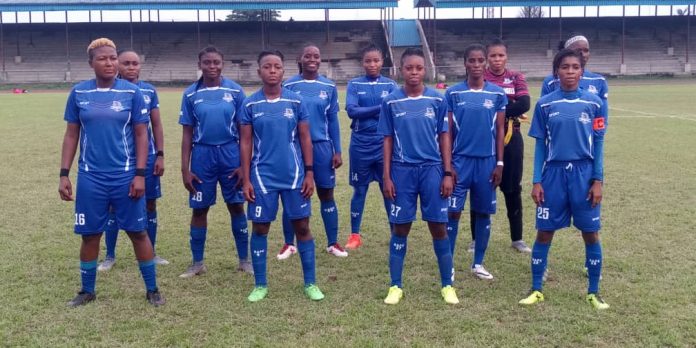 2021 NWFL Premiership Matchday Two matches recorded 21 goals from seven centres with the tie in Port Harcourt between Rivers Angels and Delta Queens recording the highest number of goals in a game with eight goals scored. Gift Monday of FC Robo Queens became the first player to score a hattrick in a game this season, while Dominance Odubanjo continued with her inspiring start to the season for the Okowa Ladies with further two goals in Delta Queens 6-2 loss to Rivers Angels to race to four goals from two games.

Www.dasportstainment247.com here reviews the games played on Wednesday across the country.

Royal Queens have recorded their first win of the season after they pipped Abia Angels 1-0 at the Warri Township Stadium on Wednesday. The club had started the season with a 4-1 loss to Edo Queens in Benin City last week but they were truly at home this term scoring the only goal of the game through Rosemary Adesina in the 73rd minute.

Royal Queens will travel to Uyo for a tie with Ibom Angels next week while Abia Angels will welcome Dream Star FC to Umuahia next Wednesday.

Monday Gift bagged the first hat trick of the season as her brilliance for FC Robo put Osun Babes to the sword at the Legacy Pitch, National Stadium, Surulere, Lagos on Wednesday.

Gift scored the curtain-raiser in the 41st to ensure they headed to the half time break with a goal up. She netted the second and third in the 52nd and 56th minutes before the Omoluabi Ladies reduced the goal arrears in the 73rd minute through Habibat Agbaji.

It means FC Robo, Bayelsa Queens, and Edo Queens are the only teams with 100 percent winning record in the ongoing NWFL Premiership. FC Robo moved to the second spot with six points from two games. The Lagos side travel to Yenagoa next to face Bayelsa Queens where their unbeaten start to the season will receive a major test while Osun Babes will hope to bounce back from their latest setback when they host Pelican Stars at the Osogbo Township Stadium next week.

Sunshine Queens won the battle of the Queens contest at the Akure Township Stadium after they dazed Confluence Queens 2-0 to secure their first maximum points of the season in front of their expectant fans.

The Akure based side were unlucky to lose 2-1 to Bayelsa Queens in Yenagoa in the season’s opener last week and they got down to business quite early when Seun Fakunle netted the first goal in the eighth minute. It was her second goal of the season. Goodness Onyebuchi doubled the lead in the 59th minute to ensure there won’t be any late-minute drama.

Sunshine Queens will trade tackles with wounded Delta Queens next week while Confluence Queens whose off field issues between the management and head coach, Whyte Ogbonda overshadowed the preparations for the trip to Akure, will host troubled Nasarawa Amazons next midweek, also.

Pelican Stars came back from a goal down to earn a face-saving home draw against Ibom Angels in the Battle of the South-South on Wednesday. Pelican has gone down the radar from the club that dominated Nigeria some decades ago. They will need to do more to remain in the top flight beyond this season except for the financial situations in the club to improve drastically.

They were whipped 2-0 in Umuahia by Abia Angels last week and having to fight back from a goal down against neighbours, Ibom Angels does not show they are serious to regain their pride of place. Both teams however picked their first point of the season in the draw.

Pelican Stars hit Osogbo as guests of Osun Babes next week while Ibom Angels slug it out with Royal Queens in Uyo.

The Jewel of Rivers raced into a-three-goal lead through Oghenebrume Ikekhua (2) and Angela Michael’s own goal in the 18th, 19th and 23rd minutes before Dominance Odubanjo reduced the tally for Delta Queens in the 39th minute. She scored her second of the game in the 48th minute for her fourth goal of the season.

But the two goals brought out the best in the Rivers Angels and goals from Maryann Ezenagu, Deborah Abiodun and Cecilia Nku in the 49th, 72nd, and 88th minutes made it a whitewash of Delta Queens in Port Harcourt.

League leaders, Edo Queens will host Rivers Angels in Benin City next week while Delta Queens will hope to stage a comeback when they entertain Sunshine Queens next.

DreamStars may continue to dream on after they lost their second straight game of the season at the Agege Stadium, Lagos to visiting Edo Queens.

Juliet Emereole unfortunately scored an own goal to hand initiatives to Edo Queens atop the NWFL Premiership table. Edo Queens are above FC Robo Queens and Bayelsa Queens by virtue of better goals difference.

Edo Queens will trade tackles with Rivers Angels in Benin City in the next league fixture while DreamStar will strive to fend off Abia Angels in Umuahia.

Nasarawa Amazons suffered another home loss to Bayelsa Queens to make it back to back defeat at the Lafia City Stadium. The Amazons lost the inaugural fixture of the season to FC Robo Queens last week and after they had the privilege of playing another game in front of their fans, it was expected that they would right the wrong against the Restoration Ladies but they got the shock of their lives.

Mary Anjor who was a thorn in the flesh of Sunshine Queens last week opened the floodgate of goals in the 24th minute for her first goal of the season but Nasarawa Amazons kept on pushing for the equaliser that later came in the 55th minute through Super Falcons midfielder, Amarachi Okoronkwo.

Many would have thought the tie would end in a draw but Bayelsa Queens had other ideas and they got their second goal and the game decided in the 90th minute through Joy Bokiri.

Bayelsa Queens will welcome FC Robo Queens to Yenagoa next week while Nasarawa Amazons will make a short trip to Lokoja for a league game with Confluence Queens next week also.