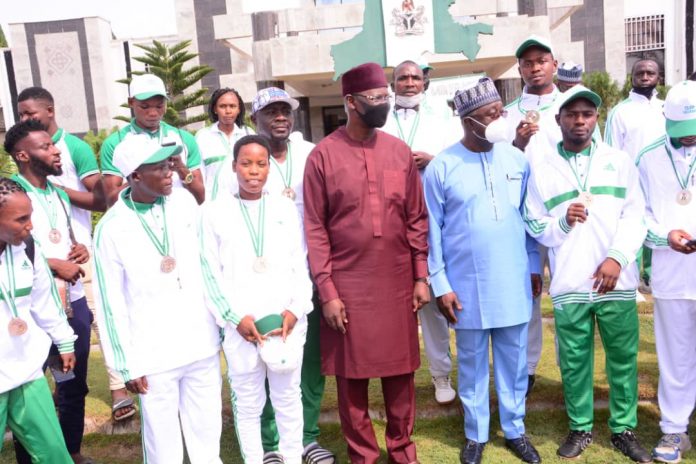 The Executive Governor of Nasarawa State, His Excellency, Engr. Abdullahi Sule, Thursday received the State’s victorious athletes and their coaches who participated at the 20th edition of the National Sports Festival held in Benin City, Edo State in April this year.

At a special reception held at the conference hall of the Government House, Lafia, the Governor congratulated Team Nasarawa athletes who won various medals at the two-week long sports fiesta and urged them to sustain the spirit, going forward.

“Let me sincerely congratulate you for your wonderful performance at the Sports Festival.

“Despite meagre resources and inadequate equipment or non completely, you still excelled at the event, bringing fame to the State.

“Let me thank the entire Team Nasarawa contingent, both those who won and didn’t win medals, for the great showing in the face of all odds. This is a huge achievement.”

The Governor assured that his administration would do everything possible to address some of the major challenges of the athletes and sports generally in the State for optimum performance in subsequent events.

For refusing to relinquish his medal to his opponent, the Governor personally rewarded gold medalist wrestler, Tularam Mamman, with the sum of one thousand dollar, saying his integrity won his heart.

Furthermore, the Governor personally rewarded the driver who escaped with the lives of the athletes and the Civil Defence escort Officer who shot and killed one of the robbers that attacked the contingent’s bus along Akeleku village, near Lafia, on their way back from Edo State, with the sum of five hundred dollar.

He said Team Nasarawa emerged 18th overall best among the 36 States of the Federation and F.C.T. Abuja, at the end of the event, and 5th best among the nineteen northern states, including the F.C.T., Abuja, a performance he described as the best by the State in more than a decade.

Othman Bala added that the deposition of the Governor towards youth and sports had helped brought stability among young persons and entrenched peaceful co-existence amongst the youth community while providing jobs and checkmating social vices in the society.

The Commissioner, however, used the platform to draw the attention of the Governor on the urgent need to retrain the State’s coaches, procure modern sporting equipment and upgrade existing ones to meet international standards.

While assuring Governor Abdullahi Sule of better outings in subsequent events, Othman Bala said the Ministry would continue to be uncomfortable until the desired results are achieved even as he highlighted what the Ministry has been doing to change the narratives.

He acknowledged the onerous support and prayers of Nasarawa State people, the media and other critical stakeholders toward the success of the State’s contingent at the festival, promising to sustain the relationship for better performance in the future.

The occasion was attended by the Deputy Governor, His Excellency, Dr. Emmanuel Agbadu Akabe, SAs to the Governor on Youth and Sports Development, and Special Duties, Hon. Kwanta Yakubu and Hon. Murtala Lamus, and other top-government functionaries.