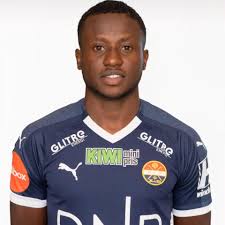 Although muscle injury sidelined him seeing through the last few games of the Norwegian top-flight, Stroemgodset midfielder, Ipalibo Jack and his club will have another season to relish after they escaped relegation by the whiskers.

Ipalibo had been regular throughout the season for Stroemgodset until he copped a knee injury and then the muscle complaint that restricted his game to 22 out of possible 30.

The Norwegian Eliteserien ended on Tuesday with with Stroemgodset losing 4-0 at home to Stabaek but the race to remain in the topflight had already been won after the team secured seven points out If 10 in the final four games of the season.

Stroemgodset began the month of December with a 2-2 draw with FK Haugesund before successive away victories over Aalesund (4-1) and Odds Ballklubb (3-1) on December 9th and 19th secured their topflight status with a game to spare.

One of the protagonists of the team great escape was Ipalibo Jack and he explained why he was not able to take part in the last few games of the season.

“I’m having a muscle injury. It’s been hard for me to sprint or play long passes. We had a scan on the injured area and the doctor said the injury caused the inflammation because of too much stressed on the leg,” Jack told www.dasportstainment247.com.

“I miss to be on the pitch when my team needed me. I still traveled with team and based on the doctor’s recommendation I can only get to play if the match is very tough. But I thank God that our games went smoothly as expected and I had to rest my legs more.”

Jack hopes to start the next pre-season injury free and raring to go after Stroemgodset ended the campaign with 31 points from 30 games.