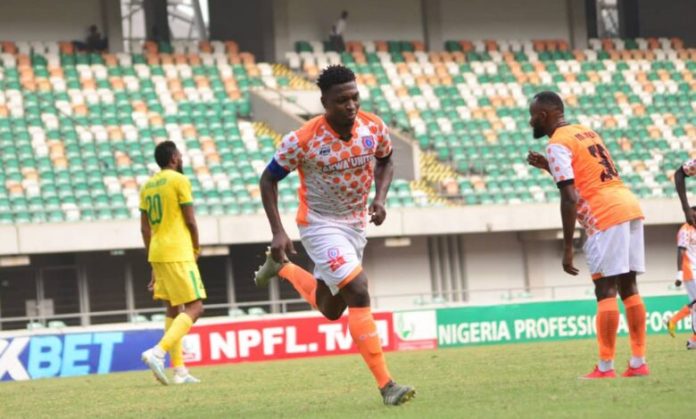 Akwa United put up a superlative performance to record an emphatic 3-0 victory over Katsina United on match-day nine of the 2020/2021 Nigeria Professional Football League at the Godswill Akpabio International Stadium – Nest of Champions – Uyo on Sunday.

Top striker Ndifreke Effiong opened the floodgate of goals in the 29th minute. Strike partner Charles Atshimene doubled Akwa United’s advantage in the 61st minute before Ndifreke added his second of the game and his team’s third from the penalty spot in the 76th minute as coach Boboye’s men strolled to a comfortable win in a match that was broadcast live on NPFL. TV.

The Promise Keepers went into the game on the back of two straight victories over Kano Pillars and Adamawa United and needed a win to move into the top five on the log.

Coach Kennedy Boboye made three changes to the starting line up that defeated Adamawa United in Gombe in mid-week. He handed left-back David Philip and striker Charles Atshimene their first starts of the season while Amadi Samuel was recalled into the first 11 after all three players made impressive substitute appearances against Adamawa United on match-day 8.

Akwa United announced their intentions inside the opening three minutes. Morice Chukwu fed Mfon Udoh with a long pass, the striker got his shot on target but goalkeeper Yusuf Mohammad punched it out for a corner kick. David Philip delivered a delightful cross into the box and Sampson Gbadebo rose highest but headed it over the bar.

The first real chance of the game went the way of Charles Atshimene in the eighth minute. Defender Olisa Ndah launched a long ball into Katsina United’s; Ndifreke Effiong brought it under control and laid it for Charles Atshimene. The striker created a space for himself and released a fierce shot but it narrowly missed the target.

Five minutes later, Samuel Amadi was fouled outside the box, Morice Chukwu delivered a superb cross inside the box, Charles Atshimene couldn’t direct his effort at goal although the offside flag was up against him.

Akwa United continued to mount pressure on their visitors and in the 15th minute, Mfon Udoh’s goal-bound shot was blocked and cleared by Adekunle Adeniyi.

In the 23rd minute, midfielder Seth Mayi lifted a clever ball over Katsina United’s defenders, Ndifreke Effiong recieved it but his shot came off Yusuf Mohammad. Mfon Udoh thought he had scored the opener when he headed in the rebound but the offside flag was up.

The Promise Keepers took the lead in the 29th minute through striker Ndifreke Effiong. David Philip whipped in a dangerous ball inside the box, Ndifreke Effiong recieved it and calmly beat goalkeeper Yusuf Mohammad to score his team’s first of the game.

In the 39th minute, Samuel Amadi made a good run forward and got into the box but his low strike was saved by Yusuf Mohammad.

Deep into first half’s stoppage time, Amadi Samuel tried a long range shot that was flying towards the top corner but Yusuf Mohammad pulled up a fantastic save to keep the scoreline at 1-0 into half time.

Coach Boboye’s men continued their dominance in the second stanza but couldn’t add to their advantage in the opening few minutes. In the 51st minute, Ndifreke Effiong latched on to Charles Atshimene’s low cross but Yusuf Mohammad punched it out for a corner kick.

After a nice link up play from the back, Samuel Amadi released Charles Atshimene on the right flank but the striker dragged his shot wide off the far post from a promising position.

Charles Atshimene finally got his name on the scoresheet in the 61st minute to increase his team’s advantage. The striker composed himself inside the box to send a powerful drive beyond Yusuf Mohammad after a beautiful work by Ndifreke Effiong.

With the Promise Keepers in firm control, Coach Boboye introduced Dare Ojo and also handed a debut to youngster Godswill Nicholas, both players replaced Mfon Udoh and Amadi Samuel in the 68th minute.

Akwa United’s goalkeeper Adewale Adeyinka was called into action in the 70th minute following a rare counter attack by Katsina United. The goalkeeper stood his ground to bring down Boubacar Massaly’s strike before gathering it at a second attempt.

In an attempt to score more, the Promise Keepers poured forward and forced their visitors back into their own half of the pitch. In the 74th minute, Ndifreke Effiong interchanged nicely with Seth Mayi and fed Charles Atshimene but the striker couldn’t direct his effort at goal as his attempt went inches wide.

Ndifreke Effiong then had two wonderful attempts at goal within the space of three minutes but both efforts were unsuccessful as Yusuf Mohammad was at his best to save both attempts.

Fourteen minutes from time, the Promise Keepers put the game beyond Katsina United when Ndifreke Effiong was fouled in the box and the referee rightly awarded a penalty. Ndifreke Effiong took up the task and scored splendidly for his second of the game and his sixth goal of the season.

Towards the end of the game, Ubong Essien came on for Morice Chukwu while the goal scorers Ndifreke Effiong and Charles Atshimene were replaced by Abbas Sadick and Akarandut Orok. They were able to close out the game for their third win on the trot.

The victory moves Akwa United from the ninth position to fifth on the log with 15 points from nine games and they will next battle Nasarawa United in Lafia match-day 10 next weekend.