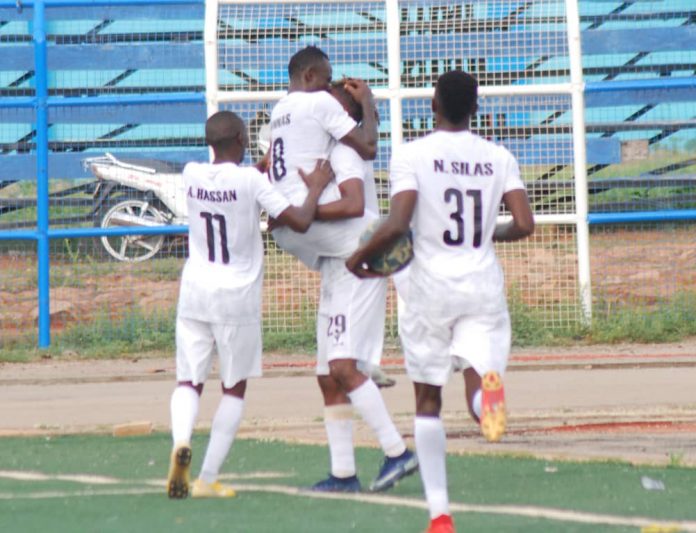 Nasarawa United quickly recovered from their painful 1-0 defeat away to Kano Pillars in Kaduna during the midweek to beat visiting Adamawa United FC 1-0 in the Matchday 24 tie decided at the Lafia City Stadium on Sunday afternoon.

The wounded Solid Miners looked dreaded from the blast of the whistle in all departments against the visitors.

However, it was the lone strike from an unlikely source, Ebuka Anaekwe, his second goal of the campaign, in the 27th minute after he was put through by Adamu Hassan, that made the difference in a game that saw the guests almost drawing level toward the closing stages as they struck the bar.

Continuously-improving central defender, Tebo Franklin, for the 6th time, scooped the Man-of-the-Match award after showing another spectacular display in the encounter.

The result moves Nasarawa United to the 3rd position on the log with 42 points, three points behind league leaders, Akwa United while Adamawa United remain rooted in the bottom of the table with 16 points from the same number of games played.

Katsina United will host the Solid Miners next Sunday at the Muhammad Dikko Stadium, Katsina, before they will prosecute two straight home games against Warri Wolves and Plateau United respectively in Lafia.

“It’s a good result for my team, but any position any team is occupying now is not permanent because we still have more matches to play.

“But the truth is, the league is getting tougher and any point you get, it’s as important as winning the league.

“Being in third position for now is not what we are looking for. We are still looking for more wins so that we can be more comfortable.”

“For me, it was a good game. Both teams gave good account of themselves.

“Nasarawa United had their chance and they utilized it. We had our chances, but we couldn’t convert them.

“Nasarawa United are a good side, especially looking at their position on the table and their brand of football, you need to give them some credit for what the coaches and players have done.

“Though our game plans didn’t work out, we will go back home and plan for the next game.”

“It’s a good thing to keep winning and pushing harder – To God be the glory.

“I keep working hard every passing day and learning new things to make myself better.

“Adamawa United, not minding their position on the log, are a very good team. They proved a lot of bookmakers wrong with their showing against us today.”