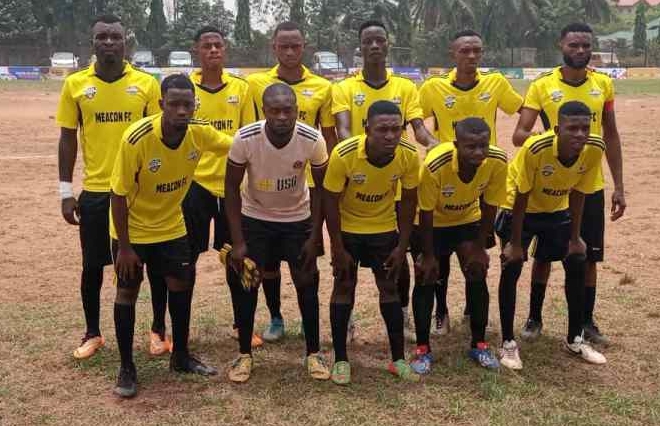 All is now set for today’s semi-final games of 2021 My Anambra ‘Super 8’ Football Tournament slated for the Neros Stadium, Nanka as from 1.00 pm.

Pope Johnpaul FC, Okpuno will slug it out with GP World FA, Nnewi in the first semi-final fixture by 1.00 pm while undefeated Mekon FC, Umunze will trade tackles with Konti FC, Umunnachi by 4.00 pm.

Four clubs made it to the semi-final stage of the tournament after the completion of the Group matches played at the Chuba Ikpeazu Stadium, Onitsha on Wednesday.

PJP FC cruised to the semi-final after they held off the tough resistance of Ifechikwulu FC to pick a priceless 1-1 draw that was enough to see them top Group A with five points. Had Ifechikwulu FC grabbed a win, they would have qualified in place of PJP FC.

Konti FC picked the second semi-final in Group A after another battling goalless draw against Rangels Football Academy. Both had equal chances of qualifying but the latter needed an outright victory to scale through.

Mekon FC ( 7 points), and GP World Football Academy (4 points) progressed from Group B. Mekon put the icing on the cake of their semi-final qualification with a 2-0 win over Golden Boys FC while GP World FA survived the onslaught of Smith City FC to play a 2-2 draw that was germane for their qualification.

The competition organized by ‘My Anambra Football’ and bankrolled by Aspire FC Adazi Ani, is the first of its kind in the state, geared towards developing and promoting grassroots soccer through investments in physical infrastructure, technical training, promotion as well as creating access to the global market.

Speaking to Sports Writers, Chairman of the organizing committee and a member of the board, Prince Oliver Ndigwe congratulated all the qualified teams for a job well done and for making good use of the opportunity availed to them by the organisers of the competition.

“I am officially thanking the entire teams for wonderful Super ‘8’ Tournament. Congratulations for those that made it to the semifinals and we wish you all the best of luck going forward.

“You guys really showed high level of maturity and we would want us to maintain the discipline that brought us this far, as we enter the knockout stage of the competition. See you all in Nanka,” Ndigwe said.

The Coach of Mekon FC, Echezona Ike lauded his boys on their performance and for ensuring that they scaled through to the next stage of the competition.

“I am happy that my players adhered to my instructions and it paid off. It was not an easy game at all, every last group game is usually dicey and any mistake can either be a blessing or bad luck. We were prepared to win this game and got the desired result.

“I thank the organisers, it is a superb initiative and great opportunity for us but I would want them to improve on the officiating. It is the knock out stage and we expect them to give us the best. Right now, we are eyeing the trophy. So, our mission must be accomplished,” Ike explained.

Meanwhile, the Team manager of Pope Johnpaul FC, Kingsley Onukwor told journalists that the game was another victory for them, having secured five points and that they are looking forward to have a complete squad in the semi-finals on Friday.

“Our joy knows no bound; we are happy to have gotten to this stage. It is not an easy one but we are very optimistic and sure of victory in our next game, no matter the team. Winning is our culture and the only valid conversation right now is congratulation to Pope Johnpaul FC, Okpuno.

“We are certain that our squad will be complete, sound and ready for the next encounter, kudos to the organisers for doing a wonderful job,’’Onunkwor enthused.

Www.dasportstainment247.com reports that the semi-finals would be played today while the grand finale takes place at the NEROS stadium, Nanka on Saturday.