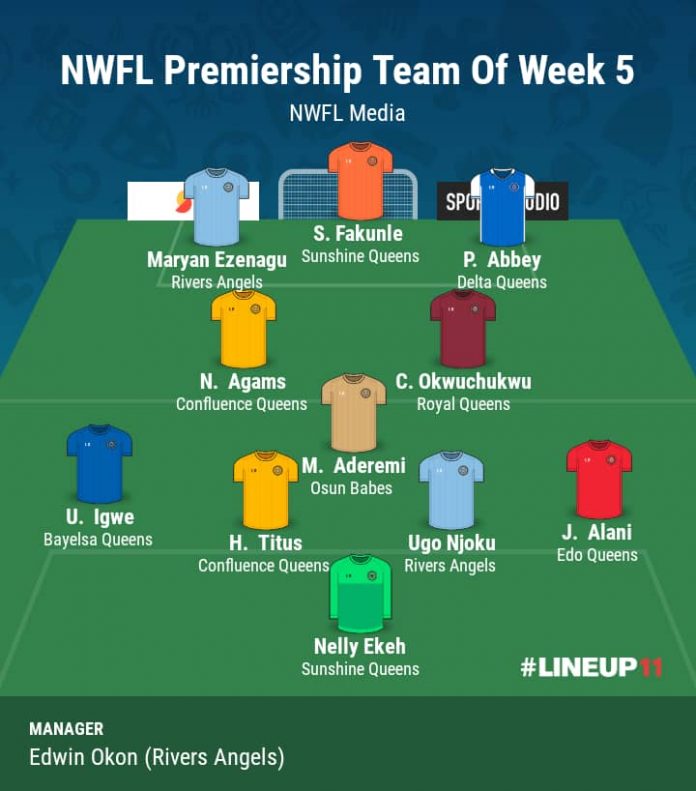 The NWFL Premiership resumed last Wednesday with a series of entertaining clashes across the country, with a hugely anticipated South-south derby between Delta Queens and Bayelsa Queens ending 1-0 in favour of the Okowa Ladies.

It’s that time of the week again where we compile our best XI from the mid-week’s action. Here is thenwfl.com team of week 5.

Torned between Ekeh Nelly of Sunshine Queens and Ibubuleye Whyte of Rivers Angels, both keepers handled the occasion well and were exceptional. However Ekeh got an edge and deserved to be the goalkeeper for week 5.

Sunshine Queens got a win in Umuahia against Abia Angels and the Flamingoes goalkeeper was one of the reasons the ‘Betty Babes’ secured all three points.

A modern day right full-back, Alani was all round, intercepting play from the Nasarawa Amazons attackers. She completed a lot of passes and was quick to attack and defend from the flank.

Despite her side losing in this encounter, Chiamaka was superb and saved her side a couple of times. This is her second time making the team of the week.

The former Sunshine Queens Midfielder produced a fine performance as the Omoluabi Queens engine room, providing a display of typical energy and dynamism.

She set the tempo for her team with her pressing play as they largely dominate the midfield battle against a very busy determined Dreamstar Ladies.

The Confluence Queens player was solid defensively and gave an impressive outing against FC Robo Queens, marshalling her side’s defence in absence of Alexandria Florence, who fell ill over the week.

She was always there to protect her side from conceding and thus deserves a place in the best eleven for week 5.

The Super Falcons defender had a solid game and was a major boost for Rivers Angels as they got a victory against Ibom Angels in Uyo.

The big defender partnered well with Amaechi Ojini to earn their side a perfect win.

Peace Abbey was called upon and did fantastically well against Bayelsa Queens. She was visibly seen all around the place and helped the ‘Okowa Ladies’ secure a hard-fought victory over Bayelsa Queens.

The former Delta Queens winger individual effort was superb, she manoeuvred past a succession of Ibom Angels players, capping a strong showing.

Two goals in her last two matches means that the former Osun Babes forward has become a peripheral figure for ‘The New Direction’ under Whyte Ogbonda this season. Her performance is surely pushing her case for more regular involvement in Ogbonda’s side.

Royal Queens have proven they have the firepower to trouble any side in the league and Chiamaka Okwuchukwu hs shown what she can do week in week out. She was outstanding in Calabar and scored the equaliser for her side to level.

She has been a key figure for her side this season, scoring some important goals and the latest was the lone goal in Umuahia against Abia Angels. She worked hard all through the game and engaged her self in most of the attacks, which finally earned her a goal.