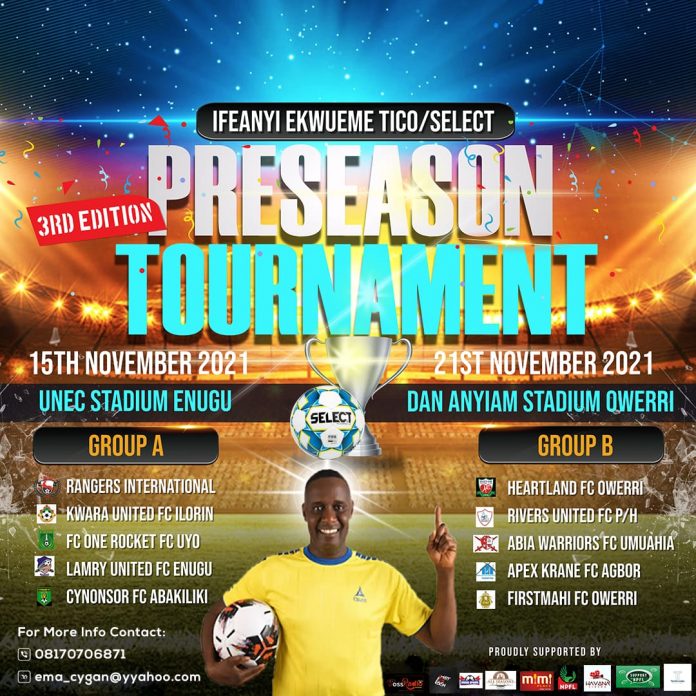 Two goals in the first half saw Lamray United FC beat visiting Ingas FC in final group A match of the ongoing Ifeanyi Ekwueme TICO/SELECT NPFL preseason tournament at the Rangers training pitch, Enugu.
The visitors could not find their rhythm especially in the first half as Lamray ran rings round them, throwing everything at their defence and could have scored fastest goal of the tournament but Izuchukwu Ogbodo chose to shoot wide after Eze Okechukwu could not effectively clear out of danger.
Lamray continued mounting pressure and were rewarded with Uzochukwu Nwabueze’s crafty tap that left keeper Chidera Ogbuke stranded for the opener on the 5th minute. Ekwunazu Chigbo equalized for Ingas on the 23rd minute. Shortly after the equalizer, the pressure seemed to be much for the Ingas defence and culminated in series of blunders until Nnaemeka Ekeh completed Lamray scoring with a close finish from Oku Emmanuel’s cross in the added time of the first half.
Upon resumption, Ingas came rejuvenated with threats from the right flank following the introduction of Okora Chukwu, Nwaobilor Emeka and Okonkwo Echezona which gave life to the team.
Lamray turned complacent and could not curtail the rampaging Ingas towards the closing stages of the game but it was already too late to salvage the result. Both team coaches alluded to the fact that fatigue and lack of sufficient rest and time for players to recuperate were responsible for the complacency.
Jude Agada of Lamray United said his players failure to score more goals in the second half was due to fatigue after exhausting their firepower in the first half adding that they are looking forward to the all important semifinal clash against Heartland. In the same vein, Kingsley Obiekwu expressed same for his team’s dismal performance until they were able to regroup in the second half.
Heartland will confront Lamray United FC at the Dan Anyiam stadium, Owerri on Thursday, in the first semifinal match just as Enugu Rangers will battle Abia Warriors of Umuahia in the second semifinal match on Friday also slated to hold at the same venue.