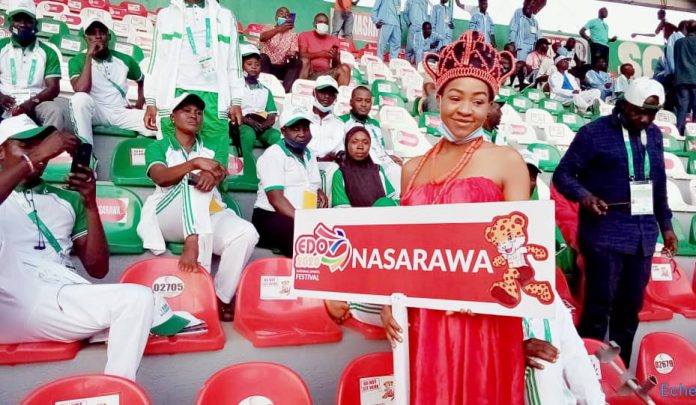 Returning from one of their best outings in the history of the National Sports Festival, one of the two buses conveying the last batch of Team Nasarawa contingent members from the just- concluded 20th National Sports Festival held in Benin City, Edo State, was attacked by suspected armed robbers at Akeleku village, some two kilometres after Kadarko town, along Makurdi-Lafia express road.

The 56-seater Team bus had rammed into the robbers who were already carrying out their nefarious act on other commuters on the highway on Thursday night, 15th April, 2021.

The heavily armed robbers who appeared in military camouflage uniform had asked the Team Nasarawa bus driver and other occupants to descend from their vehicle as they got positioned to unleash mayhem.

But unknown to the men of the underworld, one of the escort officers attached to the Team Nasarawa contingent immediately opened fire, killing one of the gang members on the spot.

As the Team Nasarawa bus was escaping the operation scene, some of the hoodlums who were hiding inside the bush returned multiple gunfires, bursting the tyres and shattering the radiator of the bus, which led to the occupants of the vehicle, majority of whom were athletes and coaches, scampering for safety.

More security re-inforcement was immediately called and the ugly situation which lasted for over four hours was brought under control, as the entire Team Nasarawa contingent members were re-united unharmed and returned safely to their destination in Lafia, the State’s capital, in the early hours of today, Friday, 16th April, 2021, contrary to some social media reports that some members of the returning Team were injured and missing.

Recall that Team Nasarawa attended the biennial sports fiesta with a 210-member contingent, and featured in twenty-five(25) events, winning a total of twenty-two(22) medals at the Edo 2020 National Sports Festival, with five Gold, four Silver and thirteen Bronze medals, to finish 18th on the medal table after fourteen days of sporting hostilities that saw Team Delta emerging overall best.