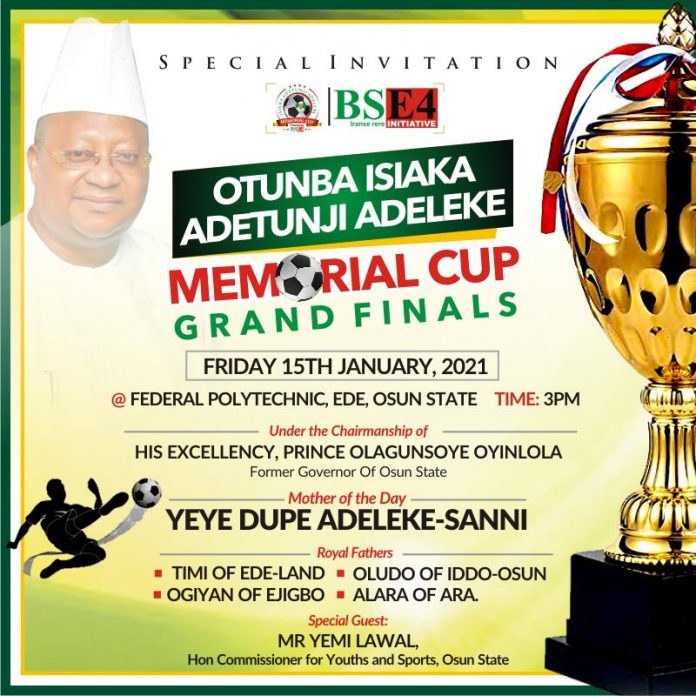 All is now set for the grand finale of the Otunba Isiaka Adetunji Adeleke Memorial Cup 2021 which comes up on Friday, 15th January 2021 at the Sports Complex of the Federal Polytechnic Ede.

The third place match between Ido Osun Warriors FC and Babatunde Eyiowuawi FC Ede will come up first by 1pm.

While the final match will be played between Adeleke Dynasty Ede and Tanjo Surprise FC Ejigbo by 3pm.

The event will have a lot of dignitaries in attendance as former Governor of Osun State, Prince Olagunsoye Oyinlola will chair the event, the Osun State commissioner for Sports, Hon. Yemi Lawal will be the special guest, while Mrs Dupe Adeleke-Sanni will be the mother of the day.

The final will be transmitted live on Rave FM 91.7 Osogbo between 3:30pm to 5pm.

The Memorial Championship is dedicated in honour of the first civilian Governor of the State, Otunba Isiaka Adetunji Adeleke and solely sponsored by Rep. Bamidele Salam who represents the good people of Ede North, Ede South, Egbedore and Ejigbo Federal Constituency of Osun State in the National Assembly.