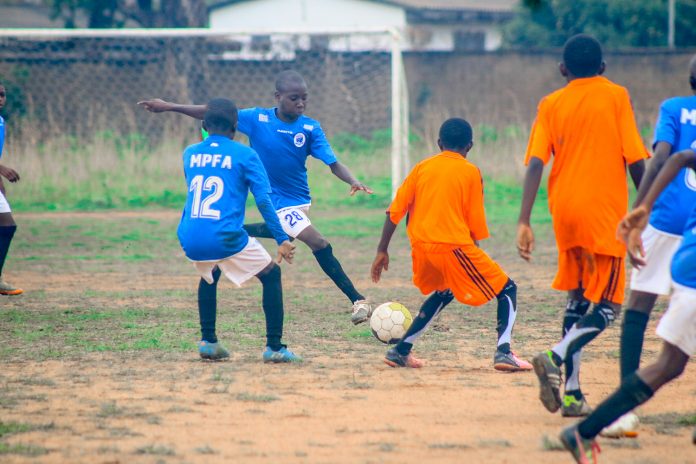 Youths in the Jos metropolis had the best of the Children’s Day celebration last weekend as they took to the pitch to excite the State of the Plateau with football matches filled with lots of goals, amazing skills and thrilling actions in the continuation of the Tsenba Wummen Football League for the Under 14 and 16 which had Week 12 fixtures decided at four centres.

This league has not been affected by dearth of goals with every match-week producing top notch strikers and quality goals too. In the last three matchdays (Weeks 10 to 12) 219 goals have been scored in 58 games played over these periods with an average of close to four goals scored per game. The last weekend fixtures produced 42 goals in 10 games in the Under 14 category while the Under 16 had 34 goals plundered in nine games played.

Ceemonie SA made it back to back victory for the first time in recent matches with another win over rock bottom Riverside FA. Gangere Youths, Relentless FA, Mees Palace FA, Jr. Sporting Boys and Jazzy Stars were emphatic in the victories they recorded in the Under 14.

Relegation threatened City Rollers produced the most shocking result of the weekend when they massacred Royal Stars 9-0 for their second win of the season while St. Monica, FC Izam, and Rahbam FA thrashed their opponents 3-0 each. Mees Palace FA and Kuru Young Stars also won their games while Mabo Young Stars recorded a rear win to leave the bottom of the table for the first time in recent weeks in the Under 16 cadre.

Elspuron are winless in their last three games and have fallen to the fifth spot with 23 points after they were surprisingly thrashed 3-0 by Jr. Sporting Boys who leapfrogged them to the fourth spot with 24 points.

Gangere Youths were awesome in their 6-0 whiplash of Young Champions. Abubakar Abdullahi scored four goals in the game to lift Gangere Youths to the ninth spot with 17 points.

Vet Glory’s Hamza Usman scored three goals but the team failed to return to winning ways as they could only play a 3-3 draw with Top Free Academy. Both teams are seventh and 10th with 20 and 17 points respectively while Mees Palace FA continued to hold on to their slender lead at the top with a 4-1 win over Light FA. Mees Palace have now amassed 32 points from 12 games.

Relentless FA benefitted from Highland Stars’ lacklustre 1-1 draw with 14th placed Young Stars to regain the second spot they lost to the latter some weeks ago after they annihilated 19th placed Invaders FA 5-1. Jeremiah Sunday’s hat-trick was crucial for the win which took their points tally to 30 points. Highland Stars are third with a further point behind.

SJC Lions caused an upset after Aaron Nehemiah’s 37th minute effort handed them three crucial points against sixth placed Super Stars. Despite having four games in hand, SJC Lions are 15th on the log with 11 points. Young Reformers also pipped Hephzibah FA who lost their 11th game of the season, 1-0. Young Reformers are 16th with 11 points from 11 games.

City Rollers whitewashed Royal Stars 9-0 to move two steps up to the 17th position with eight points.Mohammed Hassan, Jachike Paul, and Abdul Mohammed each scored a brace in the emphatic win. Royal Stars are 14th on the log with 12 points.

Mees Palace FA unprecedented season continued after a 2-0 routine win over Samba Boys extended their streak to 12 straight victories out of 12 games. They had beaten Jeddy Academy 4-0 in a rescheduled game played last midweek and have now opened a five point gap at the top with 36 points.

St. Monica FA remained in touching distance in second spot after they beat FC Sports 3-0 for their 10th win of the season from 12 games. They have 31 points and are closely followed by the other unbeaten side besides Mees Palace- FC Izam who also rolled over Tin City FA 3-0. FC Izam are third with 30 points courtesy of nine wins and three draws while Tin City FA are in the fifth position with 21 points from 11 matches.

Rahbam FA thrashed Adalchi FA 3-0 to maintain their fourth position with 26 points. They have a five point buffer between them and fifth placed Tin City FA. Adalchi FA slipped to the 12th spot with 14 points.

Mabo Young Stars secured their second win of the campaign after a 2-1 away win over Yard FC. Abubakar Musa’s double for Mabo Young Stars was only halved by Benjamin Bala of Yard FC to ensure the former leave the bottom of the table for the first time in several weeks. They are 19th with seven points while Yard FC are 16th on the log with 10 points.

Galatians FA shot to the sixth spot with 21 points from 12 games after a 3-1 defeat of Jazzy Stars, who slipped to the ninth spot with 17 points, while a second half brace from CF Bwin’s Julius Benjamin rescued a point off SJC Lions who initially seemed to be cruising to a comfortable win when Shepherd Dashe netted twice in the first half for a 2-0 lead but the table turned in the second half. SJC Lions are in the 11th spot with 14 points while CF Bwin are 13th with 12 points.