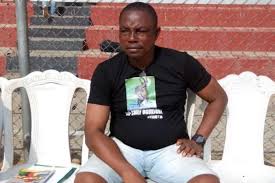 Former Kwara United gaffer Samson Unuanel has been appointed as the new coach of NNL side Calabar Rovers with his unveiling ceremony coming up on Monday.

Unuanel teamed up with the Calabar based team after leaving Nigeria Nationwide League club, Cynosure where he allegedly left due to the inability of the club to offer him professional contract.

While confirming the latest development about his coaching career, Samson Unuanel explained that he is satisfied with what Calabar Rovers offered him and confirmed his readiness to work with strong energy for the club.

“They have been treating me like a King since I came here and I want to thank the State Government here and those in charge of the team for the believe they have in me.

“I decided to come here to help the team and by the grace of God, Premier League ticket will be gotten by us in the coming season,” Unuanel explained.

Samson Unuanel is one of the best coaches in Nigeria considering the number of players he nurtured from the grassroots before becoming professional stars.