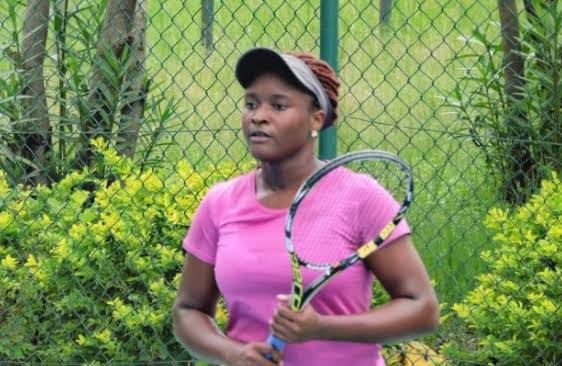 Adegoke stated this at the GSM Tennis Championship after dispatching her opponent in Wednesday’s Semi-final.

Fielding questions from BCOS Sports after her semi final victory on Court 6, of Ibadan Recreation Club Sabi, Ibadan, 23 year Sarah Adegoke said her target is to be the champion of the maiden edition of GSM Tennis Championship.

“Making it to the final (Wednesday) was a good experience for me, because this is my second tournament this year and I’m glad I came out victorious……my target is to win this championship,” Adegoke said.

Speaking on her return to the court in November at the CBN Open, Sarah confessed that she initially felt nervous but later get over her nervousness and performed well.

“It was very exciting to be back on the court last month. However I was very nervous coming back after a long time, because I didn’t know what to expect, and there were a lot of new faces. But at the end of the day I was happy with the result because I made it to the semi finals, was satisfied with my performance at the competition and I am hopeful that my game will get better in subsequent competitions”, she added.

Adegoke also recalled that she battled injury while she was away, but asserted that she is now back and better.

“I was Ill for a while, then I had this injury and other personal stuff I had to take care of”.

Since Sarah’s absence, Oyinlomo Quadre had burst onto the national stage and won all the national competitions available, but the 23-year-old Adegoke said she is ready to take back her rightful place as Nigeria’s tennis queen.

“In Nigeria we don’t have that many tournaments, but hopefully with the next couple of competitions we have in January next year, I can regain my former position as Nigeria number one from Quadre” she concluded.

Present at the venue to support the Ibadan bred Tennis star was the organiser of the 3-day championship who is the Special Assistant to Oyo State Governor on Sports Development, Hon Tobi Oyewumi.

The maiden edition of GSM Tennis Championship ends on Thursday 24th December with final games across all categories and presentation of prizes.