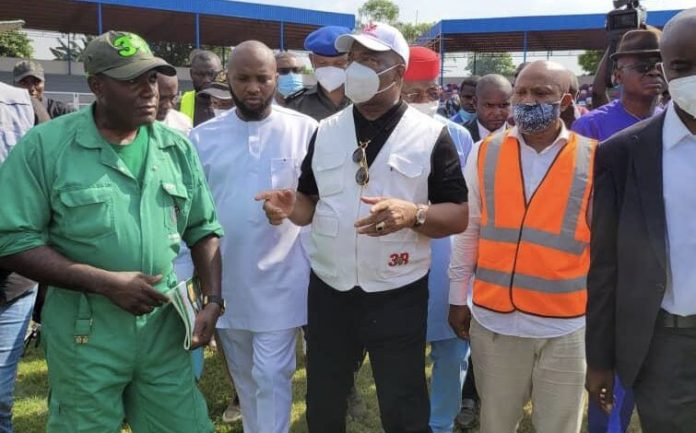 The Sports loving Governor of Imo State Distinguished Senator Hope Uzodinma has stated that he would continue to give sports a priority to ensure that the Eastern Heartland regains her numero uno position in sports in Nigeria.

Governor Uzodinma assured that it will be a total revamp of sports development in the State during his brief chat with journalists at the Dan Anyiam Stadium, Owerri and he thumbed up the ongoing renovation work at the stadium.

The hard-working Governor expressed satisfaction at the level of work so far even as he urged the contractors to speed up work as he looks forward to the re-opening of the World class arena with a quality friendly match this Month.

The Governor toured round the sports associations at the stadium even as he promised to do more work at the sports edifice.

The unarguably number one stadium builder in Nigeria and the Managing Director, Monimichelle Sports Facility Construction Company, Mr Ebi Ezekiel Egbe (Mr Moni) promised to give Imolites something to cheer at the end of the exercise.

He implored Imolites to support the hard-working Governor who he noted has big plans for Imo sports.

“The governor’s vision for sports in Imo is big…Imolites need to rally round him to actualize it,” Egbe said.