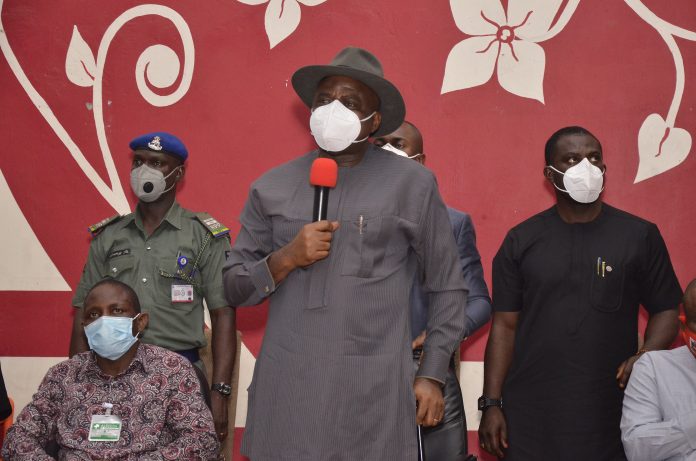 Africa/Oceania Olympic qualifiers in Hammamet, Tunisia, and ensure that they pick tickets to the Tokyo 2020 Games in Japan.

Gov. Diri gave the charge to the team in Yenagoa, where they have been camped for nearly one month in preparation for the qualifiers, which runs from 2nd to 4th April.

Following an injury to Blessing Onyebuchi (76kg), who fractured her femur in training a few days to the competition, 9 wrestlers, instead of 10, will now represent Nigeria at the 3-day event.

In a brief ceremony held in Yenagoa before the team departed Nigeria for Tunisia, the Bayelsa State Governor expressed confidence on the ability of the wrestlers to pick the desired Olympic tickets in the North African nation.

“You are carrying the banner of Nigeria to Tunisia, and so, you are going there as our athletes, as our diplomats,” he told the athletes.

“For those of you have the opportunity, who have been so trained with all the facilities, I believe that you’ll go there and excellently perform and carry the flag of Nigeria high and return as those who will represent this country and Africa in the next Olympics.

“And I believe that the God who has brought me as a miracle Governor will go with you as miracle wrestlers and athletes.”

Speaking on behalf of the wrestlers, Team captain Amas Daniel promised that the athletes will triumph in Tunisia.

“Bayelsa State Government has been so supportive to sports, in particular, wrestling,” the 5-time African champion acknowledged.

“And we promise you that we will go there and we will give our 100% – gold medal, which means we will stand at the centre of the podium, not second, not third.”

The 9 wrestlers will be hoping to join compatriot Odunayo Adekuoroye )57kg), who already sealed her place at the postponed Tokyo 2020 Olympics by virtue of winning a bronze medal at the 2019 World Championships in Nur Sultan, Kazakhstan.