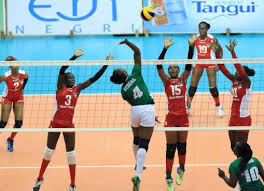 The Imo girls had been in brilliant form thrashing both Enugu and Ebonyi States teams before losing in the finals to Anambra.

Disaster was however averted when a member of the Imo State male team collapsed during one of the matches but was quickly resuscitated.

The team went ahead to lose all it’s three games against Anambra, Enugu and Ebonyi States.

The Imo State contingent raised outside of the National Festival Team, had arrived Awka, the Anambra State Capital on Thursday unsure of what to expect.

Imo State Commissioner for Youth And Sports Development, Hon Dan Ogu said, ” we just wanted them to go and try themselves out. Given how the team was hurriedly selected, we’re not expecting too much from them. “

Ogu said they did not want to disrupt the preparations by the Imo State contingent to the National Festival hence, the decision to select players outside of the Festival Team.

He praised the female team for the effort it displayed at the tournament.