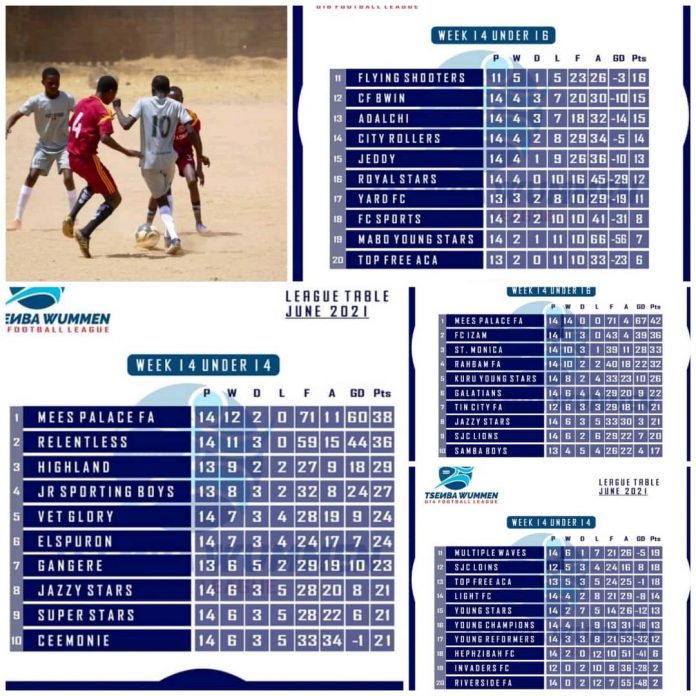 It was another harvest of goals and massive wins in the latest fixtures of Tsenba Wummen Under 14 & Under 16 Football League with Week 14 games negotiated across four centres in Jos, Plateau State last weekend. Youths from 40 football clubs and academies have made it their duty calls to garnish top-notch football artistry will well-executed goals on weekly basis and last weekend fixtures produced a whole lot of football funfair, razzmatazz, thrills and frills at cadet level.

Last weekend’s games produced massive 93 goals from 17 games played in both categories with impressive 15 victories and two draws recorded to make for an average of almost six goals per match. The Under 14 cadre produced the highest number of goals with 47 while 46 were netted in the Under 16 category.

In the Under 14 cadre, SJC Lions taught bottom side, Riverside FA basic football lessons to produce the result of the week in a 9-0 demolition. The big win lifted the Lions to the 12th spot with 18 points despite having two games in hand.

Mees Palace FA were also brutal in their 4-0 whitewash of highly rated Jazzy Stars to hold on to their slender two points advantage at the top with 38 points while Jazzy Stars dropped two places to the eighth position with 21 points.

The reigning champions are closely followed by Relentless FA who bashed Hephzibah FC 6-1 in another emphatic win. Relentless are unrelenting in their quest to usurp the title. They are in the second spot with 36 points from as many games but Hephzibah continued to court relegation in the 18th spot with meagre six points.

Ceemonie SA continued their impressive form of recent with another close victory at Multiple Waves. The tie produced seven goals with Ceemomie picking the maximum points in a 4-3 win to leap to the 10th spot with 21 points but Multiple Waves slid a place down to the 11th spot with 19 points.

Gangere Youths and Light FC also defeated Young Reformers and Elspuron 4-1 and 3-0 in that order to move to the seventh and 14th spots with 23 and 14 points respectively while Young Stars and Super Stars ended their affair in a 3-3 draw.

Mees Palace FA and FC Izam continued to dominate headlines in the Under 16 category with important victories for both teams last weekend. The Panthers preserved their six points cushion at the top with a spectacular 11-0 thunderous whiplash of 19th-placed Mabo Young Stars. Mees Palace are atop with 42 points and they have plundered 71 goals and conceded only four from the 14 games they have played this season with only five games more to the halfway mark.

FC Izam continued to play catch-up in the second position with 36 points after a 5-0 home win over faltering Adalchi FC. FC Izam are still undefeated since the season began but are yet to square up against the defending champions who must lose three games if they are to leapfrog them. Adalchi are in the 13th spot with 15 points.

St. Monica’s FA who were hitherto the early major rivals of Mees Palace are without a win in their last two games after they were held to a 1-1 draw by modest, Galatians FA who are now in the sixth position with 22 points. St. Monica are still third on the log with 33 points but they have now been closely followed by fourth-placed Rahbam FA who are with 32 points after a 3-0 win at Yard FC.

Meanwhile, Kuru Young Stars moved to the fifth spot for the first time this season with 26 points after they toppled 16th placed Royal Stars 7-0 in a rather one-sided affair while City Rollers have crawled out of the relegation zone to the 14th spot with 14 points after they whipped Samba Boys 5-2.

Jazzy Stars emerged from their 3-3 entertaining draw at St. Monica FA the penultimate weekend to thrash Jeddy Academy 4-1. The vital win has taken them to the eighth spot with 21 points while Jeddy Academy are in the 15th spot with 13 points.

The league named after Dr. Wummen Tsenba Bako who died aged 45 in September 2017 is sponsored by Mees Palace and Jos Chillin bankrolled by foremost philanthropist and football enthusiast, Emmanuel Adukwu.

You can get the full results and graphic illustrations of the league tables in both categories also in the report.