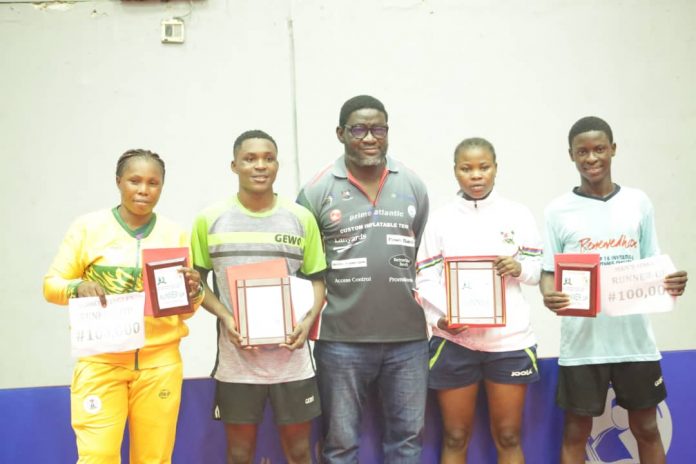 The competition, envisioned and sponsored by the Director General, Lagos State Sports Commission, Oluwatoyin Gafaar saw a total of sixty-four (64) players battle it out for about eight hours in a very competitive and fair atmosphere.

At the end of the competitions, Odusanya (from Lagos State) claimed the Women’s crown after an intriguing 4-2 win over Kwara State’s Bisola Asaju while Ondo state’s Mati also enjoyed identical win in the Men’s final, beating Bayelsa’s Samuel Boboye 4-2.

Uniquely, every participant at the one-day fiesta went home with varying amount of cash prizes. The winners (Odusanya and Mati) went home with a mouth-watering sum of N200,000 each while the first runner-ups Asaju and Boboye were rewarded with N100,000 each.

Cash prizes to the tune of over N1,000,000 were handed out to the competitiors with the Sponsor promising an even bigger and more rewarding second edition of the event geared towards discovering more talents, next year.

As part of the side attraction at the event, there was a novelty match, during which the sponsor, Gafaar, exhibited some silky table tennis skills much to the applause of participants and the sizeable number of spectators at the arena.

Gafaar also presented worthy plaques of excellence to the top two players in both Men and Women’s categories at the end of the Championship.

Kpalukwu thumbs up Governor Wike, others for support; Implores team to...