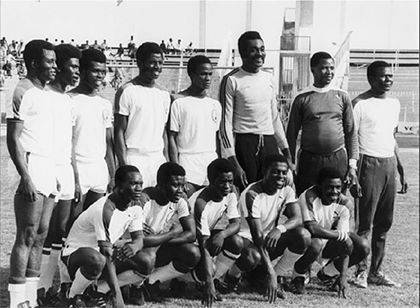 Minister of Youth and sports Development Chief Sunday Dare has condoled with the family of Jide Dina, Mighty Jets of Jos and Nigerian football community over the ex player’s death.

The Minister described Jide Dina’s death as painful and a huge loss to his family and the Nigerian football community” So sad to learn about the death of Jide Dina whom I watched live in the colours of Mighty Jets and the Green Eagles. He was a great player, robust, rugged, possessed fierce shots and aerial power. My condolences to his family , may God bless his soul.”

Jide Dina died on Thursday, 11 March 2021 after a protracted illness.

Jide Dina, who until his demise was a Coach. He was a member of the Green Eagles Squad for the 1976 Olympic Games in Montreal, Canada but was dropped at the last minute for Segun Odegbami.

He was also part of Nigeria’s Green Eagles Squad that won bronze-medal at the 1978 Africa Cup of nations finals in Accra, Ghana.

He captained Mighty Jets of Jos for many years.
His death was confirmed by the Management of Mighty Jets in a statement by Mbum Modogar Ferdinand, Director of Media and Publicity.