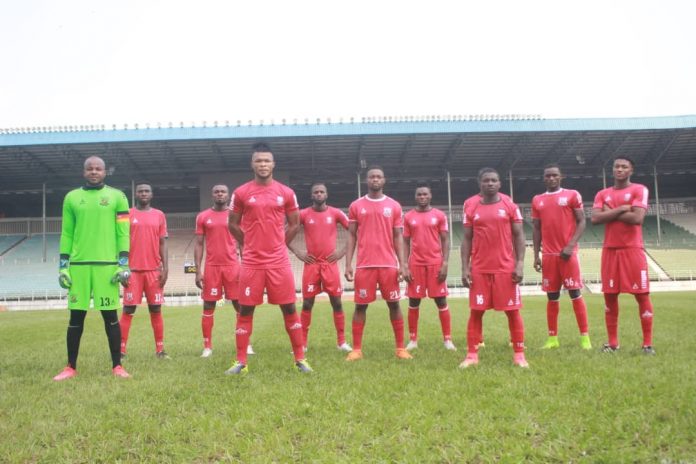 Heartland FC suffered their fourth loss of the season on Sunday in Port Harcourt after they fell 3-1 to league leaders, Rivers United in a NPFL Matchday Five tie played at the Adokie Amiesimaka Stadium.

The Pride of Rivers opened the floodgate of goals in the 18th minute from the penalty spot while Kazie Enyinnaya made it two in the 65th minute. Shedrack Oghali continued his impressive stats in front of goal when he reduced the deficit in the 78th minute but Rivers United had the last laugh with the third goal through Malachi Ohawume in the 86th minute.

Heartland FC gaffer, Fidelis Ilechukwu made only one change to the starting eleven that defeated Enyimba FC 2-0 in Owerri on Wednesday with Super Eagles goalkeeper Ikechukwu Ezenwa returning back to the team in place of Chijioke Ejiogu after recovering from an injury.

It was the host that started off brightly as ex-Heartland FC Striker, Fortune Omoniwari got the first goal scoring opportunity of the highly anticipated encounter as his shot went wide.

Pascal Eze handled the ball in his penalty area to gift Rivers United a penalty in the 18th minute of the match, he was also cautioned ( yellow card ) for dissent. Godwin Aguda stepped up to take the penalty kick which he calmly converted to give his team the lead.

Heartland FC responded with lots of attacking threats but had Shadrack Oghali and Adachi Emmanuel to blame for firing blanks at close range.

The second half had lots of attacking display from both teams with Kazie Enyinnaya of Rivers United making it two goals after he was left unmarked in the Naze Millionaires’ penalty area by Bright Onyedikachi in the 65th minute., his shot went straight into the net despite Ezenwa’s desperation to prevent the ball from going in.

In the 78th minute of the encounter, Heartland FC were awarded a freekick at the edge of United’s penalty area which Samuel Nnoshiri quickly took and Oghali was on hand to drill the ball past Rivers United goalkeeper, Abiodun Akande for what turned out to be the Naze Millionaires’ consolation goal. It was Oghali’s third goal of the season from five games.

Barely eight minutes after Heartland’s goal, the Pride of Rivers got their third goal of the game through substitute Malachi Ohawume to restore their two goal lead. The strike came off a quickly taken free kick in the 86th minute.

Up next for the Scientific Boys will be a home tie with Akwa United on Sunday in a Matchday Six duel.