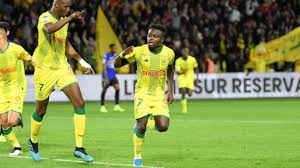 Nantes head coach, Antoine Kombouare has pumped up of the spirits of Moses Simon and his teammates ahead of their relegation playoffs two-legged duel with Toulouse who are the semi-finalists of the Ligue 2 playoffs on Thursday and Sunday this week.

The Green and Yellows have had an awful campaign and at a time went 15 games without a win which was the division’s longest streak they jointly held with Dijon (15 games) but the appointment of the new coach, Kombouare gradually restored confident as they won four of their last five matches.

They went down 2-1 at home to Montpellier on Sunday night in a game a draw would have seen them leapfrog Brest who lost 2-0 at home to deposed champions, PSG to the 17th spot which would have been enough for automatic retention in the playoffs.

The however ended the campaign in the 18th position with 40 points and will battle it out with Toulouse, who once paraded Nantes current gaffer, Kombouare as head coach last season before he was sacked over poor performances.

Speaking to journalists after their defeat to Montpellier at Stade fe la Beaujoire, Nantes, Kombouare told Simon and his teammates to bounce back impressively against Toulouse and make their strong end to the regular season count in both games that could either confirm or deny them a place in topflight football next season.

There is still a match week. It doesn’t matter if we’re still in Ligue 1 next week. There is disappointment, beyond the result,” Kombouare was quoted on the club’s official website.

“We have to go back into battle to play these dams. I do not hide what we did before with these four fantastic results that allow us to be there.
Now that’s another story. There is disappointment tonight, but they have had disappointments in the season.

“We will meet tomorrow to discuss and prepare for this game on Thursday. What is important is our ability to bounce back. We get back to work.
Alban Lafont and Randal Kolo Muani will be with us for these dams. We need them.

“We will see Sunday if the group is ready to go to the end. We’re going to make the roadblocks. We had planned. Now, you have to quickly turn your head to the place to prepare for a match against a formidable opponent. It will have to be efficient.”

Toulouse will host the first leg behind closed doors at the Stade de Toulouse, Toulouse on Thursday while Nantes will face the same side on Sunday at Stade de la Beaujoire with the winner on aggregate gaining a berth to the topflight.